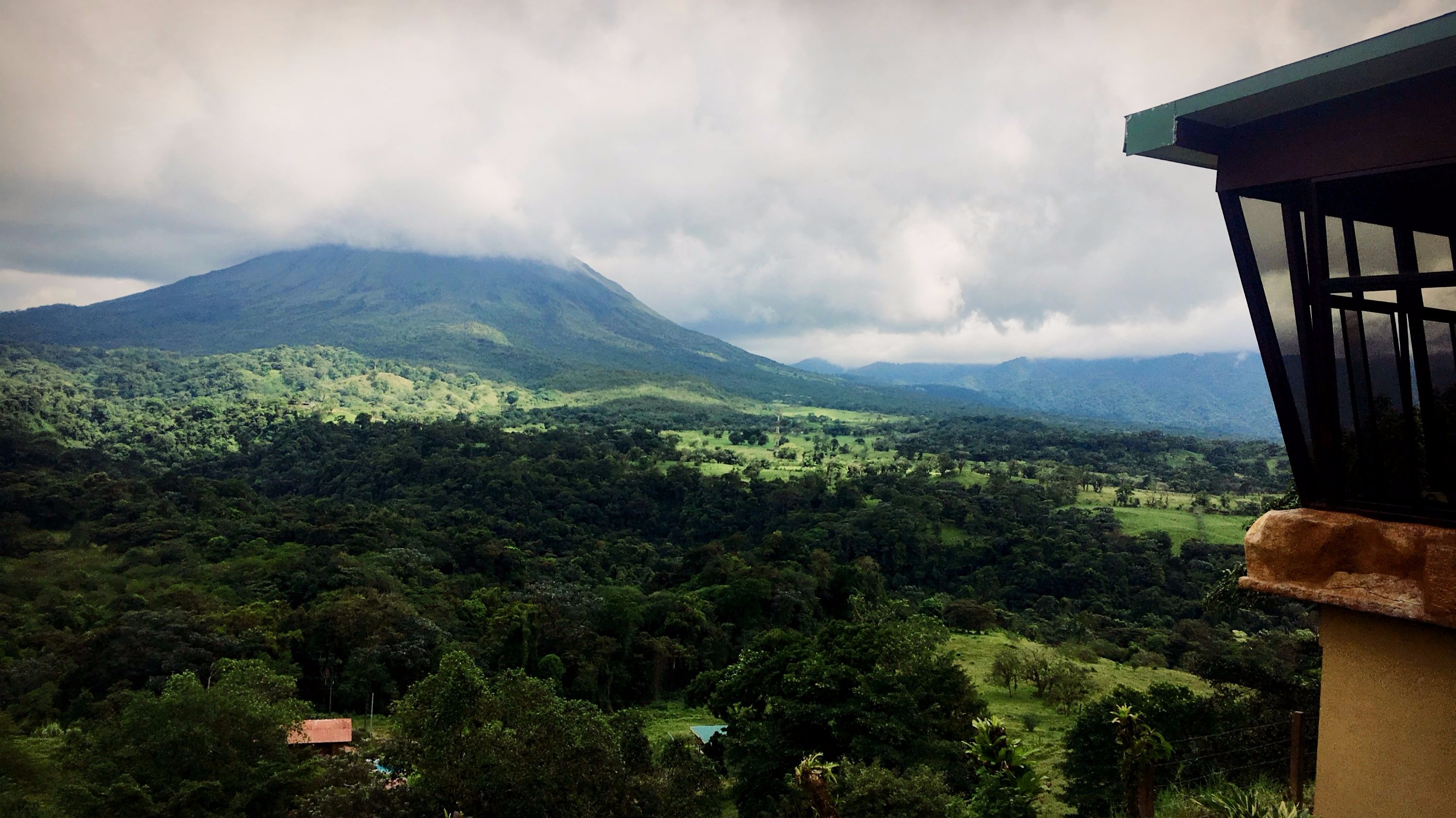 Many of my Central America exploration stories usually begin aboard a long-distance bus and this one is no different.

Travelling to the Arenal Volcano in Costa Rica after leaving our resort in Guanacaste Province. We travelled from the warmest driest area in all of Costa Rica, crossing the Continental Divide that splits Costa Rica and the America’s in two.

The journey would take us from Guanacaste on the Pacific Coast to the dense rainforest of the Caribbean side of Costa Rica.

We visited the Volcan Arenal National Park as part of a pre-booked excursion through our hotel. For this trip to Costa Rica I was staying on Playa de Matapalo as mentioned above this is in the Guanacatse Province.

This wasn’t my first time in Costa Rica, I also visited Tortuguero as part of a longer trip. This meant I knew what ti expect from Costa Rica’s beauty as a country.

Where is the Arenal Park, Costa Rica?

Arenal Park is located just under 3 hours north of the Costa Rican capital of San Jose.

Close to the Nicaragua border it is very accessible from Lake Nicaragua and San Juan del Sur on the border between Costa Rica and Nicaragua.

How to get to Arenal National Park from Guanacaste

The national park is also pretty accessible from anywhere within Costa Rica, providing you are willing to travel.

To get to Arenal Park from Guanacaste you can simply book a tour from one of the many tour operator in the Guanacaste and Tamarindo areas of Costa Rica.

The journey will take a total of 3 hours to get to the national park with a stop or two on the way.

We booked through our resort and undoubtedly paid over the odds for this excursion at $136 as mentioned.

This is my first official resort excursion and all in all the ease and simplicity of the tour seemed worth the price, all things considered.

We booked through the popular Costa Rican tour operator Swiss Travel, you can visit their office in San Jose or Liberia for more details.

You can also book to take part in an excursion with Swiss Travel irrespective of whether you are staying within a resort like we were.

Despite booking one day prior to the excursion our bus was not full, but I can imagine during the peak season (dry season in Guanacaste) tickets for excursions sell out quickly.

From Tamarindo to Arenal Park Costa Rica you must also pass through Libera and many large busses depart from this area.

The public transport bus option will require several bus changes and a little advance planning due to the distance and length of time it takes to cross the continental divide.

Smaller second class busses in Costa Rica are operated by TicaBus and operate throughout Central America and can take you to Arenal Volcano National Park.

Lonher distance busses can also be boarded from Liberia, near the airport or from various hotels in the city. You can enquire in the airport for more details and bus timetables.

This trip on public transport can take up to 6 hours, if you do not plan on taking an organised excursion bare this factor in mind.

It may be better to rent a car for this trip if you also plan on spending some time around Lake Arenal.

Getting to Arenal Lake

The continental divide of the Americas

To get to Arenal National Park from Guanacaste you have to cross the ‘Great Divide’, which is the continental divide that splits the Americas down the centre.

With the Pacific coast on one side and the Caribbean coast on the other, this unique geography and climate makes Costa Rica a truly bio-rich country.

Costa Rica is widely covered by dense rainforest and ‘dry forest’ on the Pacific Coast.

25% of Costa Rica is registered as either conservation area or has National Park status and the country itself is undergoing efforts to become the first complete carbon neutral country on the planet.

Efforts can be clearly seen on the route from Guanacaste to Arenal Volcano National Park. Many wind farms can be spotted along the mountain range that defines the countries continental divide.

Our first stop would be the banks of the man made Lake Arenal, situated underneath the shadows of Volcano Arenal in the National Park.

The lake originally existed as a much smaller body of water at the foot of the volcano in Arenal National Park and has since been expanded several times.

The reason for this is so Arenal Lake can house a hydroelectric dam and where better to have one than an area that has such heavy annual rainfall.

We spent around an hour in total eating lunch and dessert overlooking the picturesque waters of the Lake Arenal.

I was surprised, although I shouldn’t be, at all the US real estate organisations selling land and property beside the lake.

There’s clearly a market for American tourists throughout Costa Rica but I thought signage and advertising in a national park would be regulated more.

We visited Arenal Park Costa Rica for several reasons. But the package excursion made it easier for us to do so as part of one of the popular Arenal National Park tours.

Our main motivation to take this excursion was to see a volcano and experience Costa Rica’s ecosystems. Along with this, we had read about the hanging bridges in the rainforeast and were keen to know more.

We booked an excursion that included a visit the Mistico Arenal Hanging Bridges Park.

This was all booked as a whole and part of our tour from the hotel. The excursion package would include a 1.5 hour walk through the rainforest to hopefully see some wildlife and certainly some plantlife if not.

The walk itself is enjoyable and I would recommend this, for a first ‘hanging bridge’ experience I enjoyed this part of the tour the most.

My only annoyance is more to do with the people on the actual tour than the rain forest and hanging bridge experience.

Often when travelling you hear things so stupid it is almost impossible to believe your ears. I think by this point I’ve come to accept ignorance as a part of travel.

There’s a lot of wildlife to be seen also, although due to the dimly lit rainforest you can’t always get the best photos.

During our time with Mistico on the Mistico hanging bridges tour we saw two different kinds of monkeys, several tarantulas, snakes and a great curassow.

We didn’t actually see any sloths much to our groups disappointment. It’s not uncommon that people have their hearts set on seeing a sloth when they visit Costa Rica.

Hanging bridges are an extremely popular thing to do in Costa Rica. Costa Rica is covered in rainforest and cloudforest and this is a great way to explore.

Many of the national parks in Costa Rica have these hanging bridge excursions or tours.

One of the most popular and common for backpackers is the famous Monteverde Cloud Forest.

From the Mistico bridge tour, views of Arenal Volcano can be seen from the starting area and viewpoint of the rainforest walk.

Food, water and other refreshments can be found here along with toilets and other facilities.

Upon entering the ‘hike’/walking zone, tourists are advised to spray for mosquitoes and other insects before entering the rain forest area itself.

The guide from Mistico was professional, fun and most of all asserted the importance of speaking, learning and acknowledging the language of the country we were visiting.

Throughout the tour he would introduce plant and animal life in Spanish always allowing the group to educate themselves, whether they wanted to or not.

There is an entrance fee to the national park. For us, this was paid in advance as part of our tour.

After spending the majority of our afternoon on the Mistico Arenal walk it was time for us to leave Volcan Arenal behind and head to the second part of our excursion.

This would be at Titoku Hot Springs. I should explain that this isn’t my first volcanic hot springs experience. My first was actually in Baños/Baños de Agua Santa, Ecuador.

Titoku is clean and luxurious. The reception and facilities are what you’d expect and we actually had the entire complex to ourselves.

With encroaching plantlife and the beautiful views and surroundings and an hour to kill Titoku became the perfect way to relax and wind down a day exploring Costa Rica.

Titoku Hot Springs are still situated in Arenal Volcano National Park and are not very accessible by public bus.

The hot springs are located on a main road and probably only accessible if you rent a car during your day in this area.

Along with Titoku Hot Springs there are a range of other hot springs and spa resorts scattered around the area.

The active Volcano Arenal heats the ground which heats the water in the natural hot springs.

Although the heating system of the hot springs is natural many of the pools are artificially made or altered for tourists.

Why you should visit Arenal Park Costa Rica

Arenal Park, Costa Rica is a must visit in my opinion.

Whether staying in a resort or on a backpacking trip add visiting hot springs to your bucket list. Along with this you’ll want to add some hanging bridges and a spot of lunch by Arenal Lake.

If you decide to do this trip as part of an excursion or solo it’s definitely one you will not regret.

In Arenal, you’ll get to see the best of the best in Costa Rica so this destination should not be skipped.