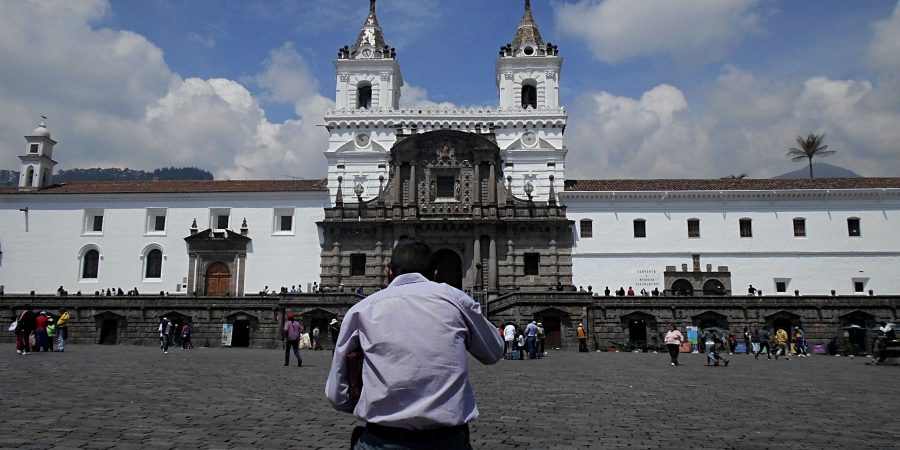 I didn’t know what to expect from Quito when I arrived, but I was not expecting the Pichincha Volcano hike, that’s for sure.

After travelling from Popyan via Pasto in Colombia and taking a quick stop at the stunning Las Lajas sanctuary, we arrived in a cold Quito.

For the record, Quito isn’t cold. It’s actually a very warm capital given it’s proximity to the equator. However, I found Quito to be a bit chilly given all the time I’d spent in the scorching North of Colombia.

During our time in Quito we’d come to make three epic decisions.

The first would be to try out the Pichincha Volcano hike. The second would be to visit Isla de la Plata and the final decision would be to see Otavalo Markets.

Arriving in Quito was a shock the the system, but not in a bad way. I found Quito to be unlike any of the South American cities I’d visited.

On reflection my opinion remains the same, it’s not like Medellin or Lima and it certainly isn’t like La Paz.

Quito is the capital of Ecuador and the biggest city in Ecuador. It sits as the second highest capital in the world after La Paz, Bolivia.

The reason Quito is so unique vs. it’s Colombian or Peruvian counterparts is because of the historic centre.

The historic centre of Quito and the architecture located within this area is known to be the best preserved in all of the Americas. The city also has UNESCO World Heritage status due to it’s sheer beauty.

One other thing Quito is known for it it’s location. Let’s not forget where in the world Quito sits. The city is located extremely close to the equator, which is actually only around 25km from the city centre itself.

Things to do in Quito

We spent a few nights in Quito exploring the historic centre, marveling at the architecture and soaking up all the city has to offer.

Quito is a fun city. It feels older and more mature than Lima and other cities in South America. I suspect this maturity comes from the sheer volume of colonial heritage in spread across such a small space.

There is also a sophistication about Quito. It has a cosmopolitan vibe not dissimilar to Mexico City. There is a very noticeable cafe culture in the city too which is really enjoyable for travellers.

I would definitely rate the cafe culture in Ecuador’s capital as one of the best things to do in Quito.

The bars, nightlife and cafe culture in Quito offer endless fun for tourists and backpackers. There are some great live music venues, coffee shops and unique restaurants in the city for you to explore.

Along with all of the great restaurants you’ll also find all your typical fast food favourites.

Surprisingly there are a wide range of veggie and vegan eateries in Quito, which is quite refreshing for South America. The Hare Krishna centre in Quito is home to the popular Govindas.

Govindas is a must try for veggies and vegans, the set menu here is very budget friendly. You can also try out some yoga here if you want.

Eating on a budget in Ecuador

Ecuador uses the US Dollar, so generally speaking you might expect it to be more expensive than Colombia and Peru. Although it is slightly pricier to eat and drink there are still set menus and bargains to be found.

If you eat local you are more likely to pay a local price when travelling in South America. Stick to the menu del dias and you won’t be let down.

We found this in Govindas and a few other local restaurants located a little further out of the historic centre.

Along with the cafe culture and great nightlife, the city of Quito in itself is incredible to look at.

As mentioned, Quito is one of the best-preserved cities in all of Latin America. The colonial heritage and architecture is everywhere and makes for an incredible walk through the historic centre.

Be sure to take your camera out with you on walk around the centre of the city known best as Quito’s historic centre.

During mid day when the blue backdrop of the sky meets the stunning white building tops you’ll want to get some photos. Expect the main historic centre to be busy, like most Latin cities.

When in Quito you’ll want to ensure you add these must see places to your historic centre bucket list.

There are several excursions you can take from the city.

We actually left Quito more than once during our time in the city. The first time we left was to discover Otavalo Market. A popular and famous market two hours outside of the city.

The markets are popular with tourists and locals alike, many people take the journey to and from Quito to visit the various food and craft markets. I would highly recommend taken the four hour round trip.

Our second trip outside of the city would be to take part in the Pichincha Volcano hike, something I was persuaded to do by our group.

We’d dedicate a day to the hike, with just enough time to grab a bite to eat before taking a bus to Banos, our next destination.

After several discussions about the hike, I wasn’t so keen once we got discussing altitude, jumpers and layered clothing.

You’ll want to do your research before you commit to heading up to Volcano Pichincha to ensure you are well prepared. Make sure you understand you will need hiking boots and some warm clothing.

Volcano Pichincha is situated high above the city of Quito at a staggering 4,500 meters above sea level. The two peaks, Wawa Pichincha and Ruku Pichincha are often bucket list items for South American adventure travellers.

I’d like to lie and say we climbed the full 4,500 meters of Volcan Pichincha but we didn’t. There is a cable car, known as the TelefériQo that takes tourists and budding hikers up the first 2,000 meters.

If you plan on doing the Pichincha Volcano hike then I seriously recommend this option. You can easily take a cab from the historic centre to the bottom of the Teleferico and the journey takes 20 minutes to get to the top.

For us, the cable car option was much more appealing than doing a full 4,500 meters in one day, so we climbed aboard and headed up to the start of the hike trail.

As I’ve mentioned, the Pichincha Volcano teleferico can be boarded from the bottom of the volcano where the taxis drop off and collect climbers regularly.

There’s toilets, coffee and snacks available in a reception/cafe area for tourists at the start of the hike. Someone kindly recommended getting some sweets to keep us going. I’m glad we did!

The 3 hour hike was a struggle, the altitude made my lungs feel like they were going to pop and my head was going to implode. I’d read before climbing Volcano Pichincha that the intense altitude can be a struggle for most, so be warned.

After leaving the teleferico it took us 3 hours to climb the remaining distance to the peak of Ruku Pichincha. It then took us 45 minutes to get down, I think that alone puts into perspective the impact of altitude on your hike up.

Above sea level and so close to the equator Volcano Pichincha has a tough climate. The weather, although quite cold is deceiving as the sun is very strong at this height.

The air is cold, but the sun during the hike is strong. You’ll want to wrap up and ensure you are wearing SPF.

Volcano Pichincha should definitely be on your to do list when visiting Quito but be prepared because it is difficult.  However, in saying this I was pretty impressed with my hiking achievements once we made it to the bottom.

If you have some time to spend in Quito and would like to try your hand at something more adventurous then climbing Volcano Pichincha is more certainly for you.