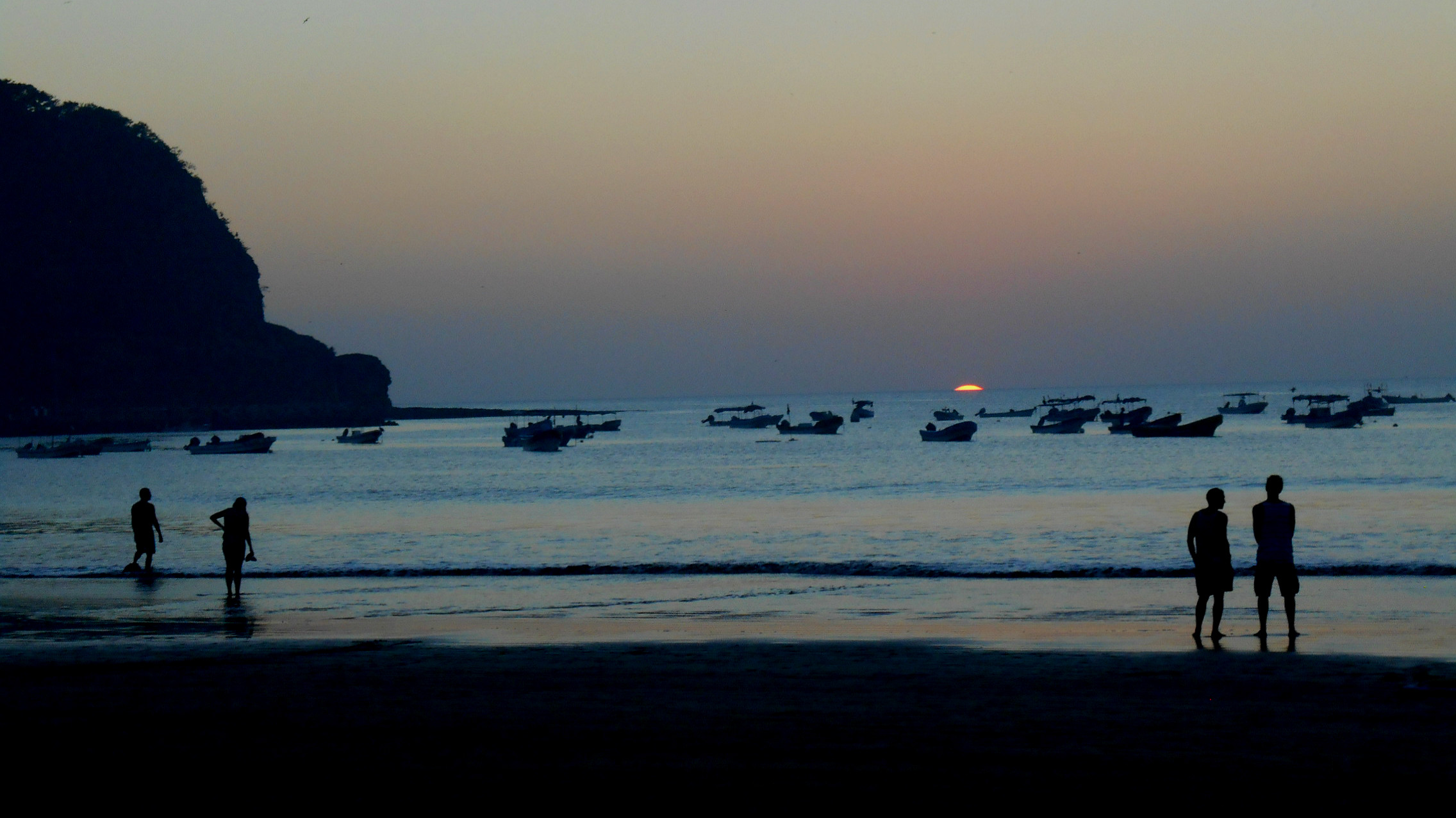 The words Sunday Funday had been echoing around my mind since I first first heard them used in the same sentence as the phrase ‘pool crawl’.

I was about to experience Nicaragua’s best party. Sunday Funday San Juan del Sur was our last stop in Nicaragua and what a way to end our time in one of my Central American favourite countries.

It’s a bit trashy, overpriced and filled with loads backpackers too drunk to remember why they are drinking. What’s not to love about Sunday Funday?

Where is San Juan del Sur?

San Juan del Sur is less than an hour from Costa Rica on the very tip of the Nicaraguan Pacific Coast.

It is easy to reach this coastal town from Ometepe, Rivas and other locations in Costa Rica and Central America.

We arrived in Saun Juan by taxi with an american duo we’d met getting off the ferry from Ometepe. The cab ride was short and inexpensive. It is common for people to grab a shared taxi to San Juan from the ferry port once leaving Ometepe.

The other main place to get to San Juan from is Rivas, where you’ll find plenty of busses heading to the small coastal utopia.

In a strange turn of events somewhere along the way between Guatemalaand Utila, Honduras we stopped remembering the days of the week so arrived in San Juan a little earlier than expected.

This worked out well for us as it meant we had arrived just before the weekend tourists for Sunday Funday San Juan del Sur.

What is Sunday Funday?

What is Sunday Funday? That’s the big question. Sunday Funday is a pool crawl organised and managed by the two biggest party hostels in San Juan del Sur, the Naked Tiger and Pachamama’s.

Four locations over the course of one afternoon and evening and a whole load of tourists who visit Nicaragua  and San Juan just to witness the madness.

To buy a Sunday Funday ticket you have to head to Pachamama’s and purchase your T-Shirt and wristband before the pool crawl starts, they let you know where to go and the times too.

Jay met up with a group of boys we’d met the night before and spent the first few hours and first two locations of Sunday Funday without me, drinking his way through Nicaragua.

I joined Jamie at the second location and we hopped in the back of our first pick up truck up the hill to the Naked Tiger.

I was hoping to be able to get a late entry ticket which is possible at a discounted price.

What to expect from Sunday Funday San Juan del Sur?

I guess for me Sunday Funday started with us jumping into the back of a pickup truck.

Everyone’s already too drunk to care about road safety so there’s people just kind of on the vehicle, sat on the roof, sat on the sides, anywhere they can squeeze.

The Naked Tiger was already packed by the time I arrive and as a latecomer I was able to purchase a discounted ticket/wristband.

If you arrive late you won’t get your free T-shirt so it is recommended to get your ticket at the beginning of the day. It is good to know that late entry is accepted.

Searches do occur at the Naked Tiger with it being a hostel and outside the main San Juan del Sur area. Alcohol and water are taken off you before entry, just in case you were wondering.

Drinks are so reasonably priced at the Naked Tiger that everyone’s carrying more than one around. Expect to pay $2 for a rum and coke and the same for a beer.

At the Naked Tiger during Sunday Funday they operate on a ticket system where you buy a ticket and exchange it at the bar for a drink to try and speed up service.

Remember this and buy your tickets at the bar of each venue to avoid queuing up to be sent to buy drinks tokens.

At Sunday Funday there are DJ’s playing in every venue expect to hear some freaky Justin Bieber meets Wonderwall remixes. As mentioned there are four venues in total for the ‘pool crawl’.

I joined the fun at Naked Tiger which is the third stop for the crawl just before sunset. The first locations are also filled with music, cheap drinks and Sunday Funday San Juan T-shirts.

When I arrived at the Naked Tiger Hostel I was met by an ocean of American boys chanting USA and fist pumping like they’ve never heard music.

For Sunday Funday no one is dressed in anything more than their shortest shorts or swimwear. Some people get face paint and glitter but it isn’t a requirement. Remember most people also wear their Sunday Funday T-shirt.

The last venue of the night is a beach bar on the beach and many people spill out from the club to the sand late into the early hours of the morning.

Where to stay in San Juan del Sur?

There are a lot of places to stay in San Juan del Sur, below are the most popular.

The Naked Tiger and Hostel Pachamama are the ones that run Sunday Funday and are usually difficult to get into unless you book and arrive in advance.

The Naked Tiger is a villa style hostel, high in the hills above San Juan del Sur overlooking the bay.

It’s one of the most popular and best hostels in all of San Juan del Sur and getting a room here on the day of arrival for Sunday Funday can be impossible.

Naked Tiger has a pool and during Sunday Funday everyone chills in this area to watch the sunset. The majority of the fun happens at Naked Tiger as it’s the day-into-night venue, with DJ’s playing and drinks flowing.

We knew San Juan del Sur nightlife was going to be fun before arriving. we spent most of our time in the Loose Moose drinking Moose Juice.

San Juan is a great place for nightlife. The Loose Moose Canadian bar is just one of the popular haunts in town. If you are spending a few days either side of Sunday Funday check out Iguana Bar, Dale Pues and The Loose Moose.

A lot of the bars have drinks promotions and happy hour, which makes the nightlife here very budget friendly.

Even the more expensive beach side restaurants have these offers and promotions.

Along with nightlife there are some very budget friendly places to eat, including lots of set menus and burrito shacks around town.

Street food is reasonably priced for any backpacker budget, making San Juan a great place to stick around. Taco Stop is a famous little place and so it Don Monchis Pizza.

The best thing to do is ask around town for the best places to eat as there are many small well priced places dotted around town.

Why should experience Sunday Funday in Nicaragua

I always expected Sunday Funday, Nicaragua to be fun and funny but I’m really surprised it lived up to expectations.

Yes, there’s a tacky aspect of people wearing matching T shirts and being too drunk to hold any form of conversation but that’s actually the whole point.

The last few hours of Sunday Funday resulted in the Naked Tiger providing food and everyone to refuel before heading to the final location, I’m not really sure how long we spent at the Naked Tiger and how many familiar faces I bumped into but I know it was a while.

Spending an evening at the Naked Tiger, it’s easy to see why people call it the best hostel in San Juan del Sur. Once the party ended there the pickups arrive and people quickly started to move onto the beach for the final location of the evening and of our Sunday Funday.

At Sunday Funday, you feel so grateful to just be right there in the moment with fellow backpackers and travellers alike.

It’s about creating a lasting memory of your time in Nicaragua wearing your Sunday Funday San Juan del Sur T-shirt and I really like that feeling.