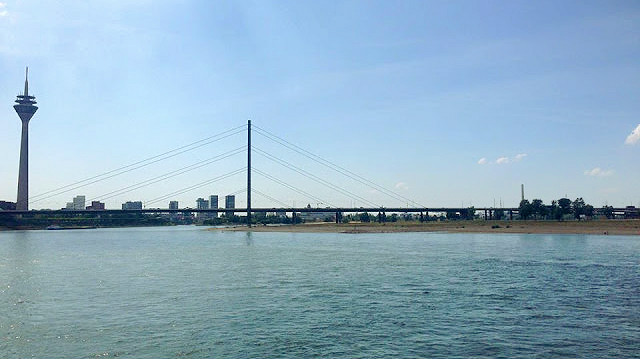 A perfect girls summer city break to to Dusseldorf for a little bit of summer in the city.

Ryanair’s long list of unbeatable flight prices gave us the freedom of choice over which city break we’d be taking. Germany would ultimately become our destination of choice.

Germany was actually mentioned several times in our planning. Great weather, culture and enough beer and clubs to keep us going.

We settled for a Dusseldorf city break knowing that Cologne was only a train ride away, giving us the flexibility to cram two German cities into one trip.

The four of us myself and three friends booked a £30 flight for August. There is no better time to travel than in the peak of the European summer time.

The European summer in Dusseldorf

There’s something so exciting about the European summer time. I don’t know if you’ve felt it, but it feels kind of like the fun will never end.

Whether you’re staying in a backpacker hostel, find yourself on a train with a group of inter-railers or just get chatting to some people in a bar. There’s a great sense of warmth across mainland Europe in the summer time.

Germany is a country I find so fun to travel, along with Dusseldorf and Cologne I’ve spent time in Hamburg and of course, Berlin.

For this trip we’d spend our time split between Dusseldorf and Cologne connected by the efficient transport links throughout Germany.

Where to stay in Dusseldorf?

For some reason unbeknownst to me we booked the snazziest looking hotel. Slightly out from the centre but accessible by a quick cheap taxi or even cheaper sweaty tram ride.

We paid a little more than we would have for a quirky hostel but the comfort and luxury of a chain hotel was pretty pleasing.

We stayed at the Courtyard by Marriott. I’d describe our Düsseldorf accommodation choice as pristine and business-like with a small restaurant and bar.

Despite enjoying the accommodation, I would almost certainly prefer to stay in a more central location if I returned. Given the group nature of our Dusseldorf city break, I’d also opt for one of the below hostels;

There is a tram service that operates in Dusseldorf and it is very simple to use.

Getting around Düsseldorf became simple for us and we travelled with locals on the frequent trams that travel to every area of the city.

The tram network in Düsseldorf is a savior. Certain lines even run throughout the night which saves you a lot of money on taxis. Praise you Düsseldorf tram system, an ideal feature for any budget city break.

Things to do in Dusseldorf

Düsseldorf is an odd choice for a city break, I agree. It’s more common you hear about a Düsseldorf stag do thank girls city break.

But in the height of summer the streets are hot and the bars and restaurants are filled with mainly German tourists.

Along the river Rhine you can grab a cocktail at a bar with floors made of artificial sand, booming music and wait staff with accents from across Europe.

This area is more commonly known as the Altstadt and is home to the old town. If you plan on spending a few days in the city, you’ll want to get to know this area well.

Some of the best things to do in the city of Dusseldorf;

Compared to a city like Berlin there isn’t a whole lot to Düsseldorf from a tourism perspective.

There’s some great old and modern architecture to seein the old town, but when it comes to famous and great landmarks, notable places Dusseldorf isn’t a top contender.

We were there mainly for the nightlife and the fun and we certainly had both.

We actually visited the riverside promenade bars and restaurants every night just next to the main old town and right by all the nightlife.

The cool air and cool beers by the Rhine attract large crowds of couples, families and groups of friends.

There are good times in the atmosphere and you could probably close your eyes and imagine being sat at any beach resort in the whole of Europe.

Music, sand, cocktails and great company. Isn’t that what a Dusseldorf city break with your friends is about.

The Altstadt has previously been referred to as the world longest bar, the old streets of Düsseldorf’s Altstadt come alive at night.

We asked locals the best places in town and one place came up more times than not, Kuhstall.

Düsseldorf is small enough to walk around on foot but big enough to not feel bored.

We grabbed four tickets to a tacky ‘all-you-can-drink’ river cruise which resembled something from the TV show Coach Trip, I admit we chose to participate for the drinks only.

Cold, local German beers in the midday sun along the river Rhine for the price of €12 Euros is something only an idiot would say no to.

There are other Rhine cruises available if you do’t want the boozy element. Most can be booked from the Altstadt area or the tourist information centre.

A day trip from Dusseldorf to Cologne

As mentioned, one of the key reasons we chose to take a Dusseldorf city break was because of Cologne.

The city of Cologne is located 30 minutes away from Dusseldorf by train. The train to Cologne will cost you €5 in total, making either of these German cities a great location for your summer city break.

Cologne in comparison to Dusseldorf as a summer city break destination boasts some of the top sights in Germany. Cologne is actually even home to of the most famed cathedrals in Germany.

Upon arrival in Cologne, we spent a touristy 30 minutes marveling at the stunning cathedral.

The medieval Gothic architecture towers above you and at times blocks out the sun. A real treat in the packed square with the summer sunshine hammering you.

I’ve since heard about a rivalry between Düsseldorf and Cologne and from the filled courtyard of the church I’d say on our visit Cologne was winning in terms of attracting tourists.

There are a different range of things to do in Cologne including a cable car and a zoo, Dusseldorfhas neither of these so we were keen to tick them off our list.

Things to do in Cologne

When arriving in Cologne from Dusseldorf you’ll want to stop off at the tourist information centre if you are short of time.

From here we booked a short city tour and jumped on a novelty train to pack in as much of Cologne as we could. Along with out city tour the other recommended things to do in Cologne include;

Our city tour on a bright yellow and green train took us through the city and the the start of the cable car we were so keen to check out.

Here, we endured the warmest, sweatiest cable car ride in all of history across the Rhine, over a nudist spa and over the city of Cologne.

We simply couldn’t have picked a warmer August day to cram ourselves into an non ventilated cable car. The views of the city from both the train and the cable car are a great way to see Cologne in the sun.

As a group we decided to visit Cologne Zoo, something we had discussed throughout the trip after hearing it was one of the best in Europe.

During our time at the Zoo we all felt particularly saddened for the animals stuck in boxes in the sun, just like we were in the cable car.

Although we enjoyed our time at Cologne Zoo I believe we had all reached an age where watching wild animals in cages signifies something more than just a fun family day out for us.

Although I don’t doubt the welfare of the animals, on a particularly hot day I can’t say I loved seeing wild animals sweating in cages.

Cologne Zoo is very well kept and I am assured that the animals and grounds are well looked after. However, as an adult I guess the novelty of a Zoo isn’t the same as when I was a kid.

If you are an eager European traveller and want to pack two cities into one trip then you should definitely consider Cologne and Dusseldorf.

If you love a little culture and history, you can find this in Cologne. Meanwhile, if you plan to have some fun drinks in the sun and explore an old town, you can do this in Dusseldorf.

If you plan a city break to Germany, don’t rule out these two underrated cities over Berlin and Hamburg. Although not as packed with attractions, any city in the sun can be a fun one if you make it.