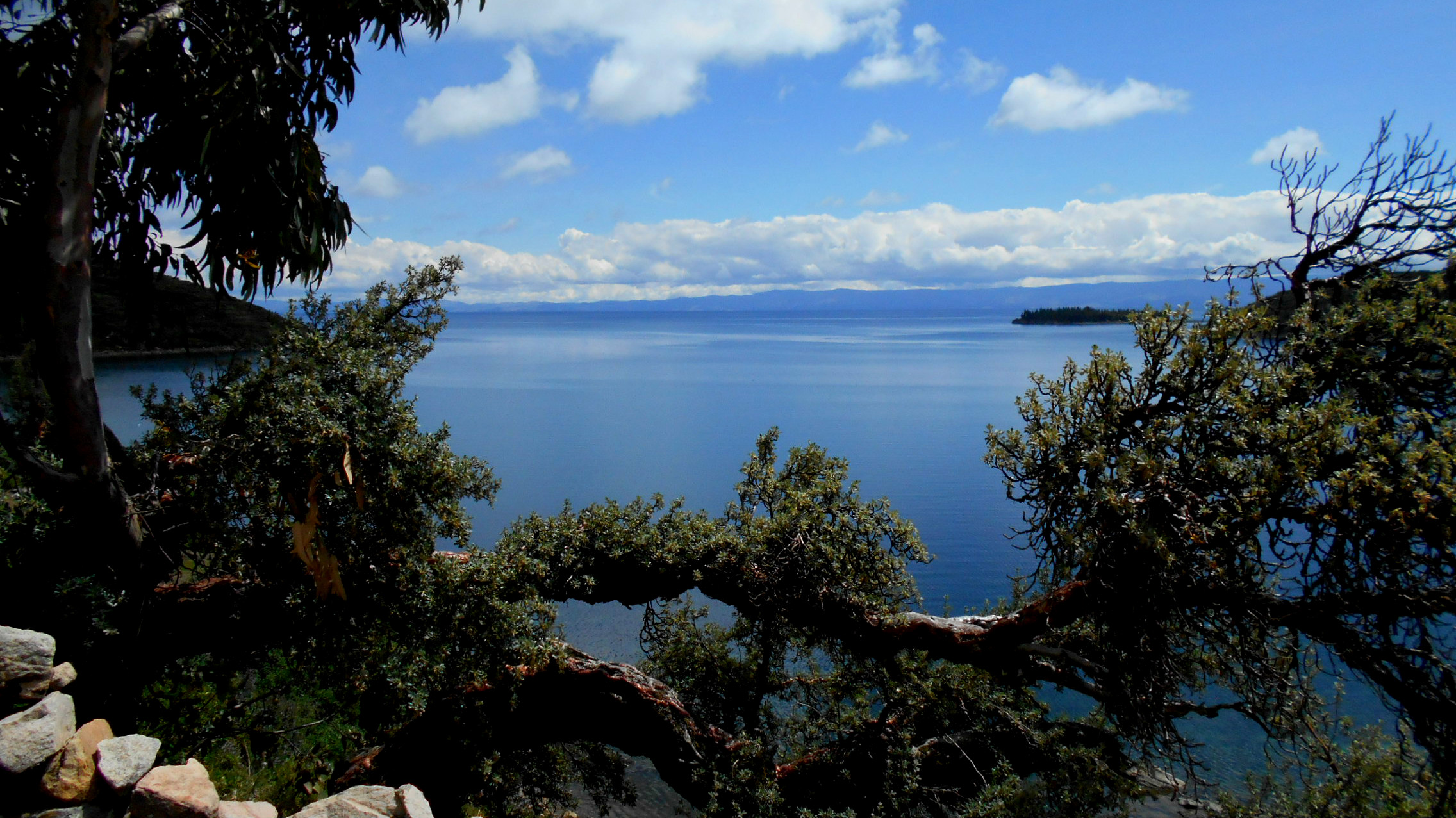 Lake Titicaca, one of the worlds most curious and largest lakes and home to islands such as Isla del Sol, Bolivia.

Inhabited for hundreds of years by indigenous communities of Bolivia and Peru we couldn’t pass up the opportunity to spend some times on the shore of this great lake.

A journey through the Americas, the Andes and several countries later we found ourselves in Copacabana, Bolivia and Isla del Sol, Lake Titicaca.

Another breathtaking island on the centre of a lake just like my first island on a lake, Ometepe.

Where is Lake Titicaca?

Lake Titicaca is the largest lake in South America and ranks as one of the largest in the world. It is located in the Andes Mountain range in between Peru and Bolivia.

Lake Titicaca or Lago Titicaca in Spanish, is regarded as the highest in the world. Throughout history there have been many different civilisations living around Lake Titicaca, but perhaps the most famous are the Incas.

You can get to Lake Titicaca from Bolivia or Peru, there are several lakeside towns. The two we chose to explore the lake from were Puno and Copacabana.

If you decide to visit both, you can cross the border via. the lake for ease on an organised bus. Don’t surprised if you physically have to cross the lake too!

Getting from Peru to Bolivia

Our first lakeside destination was Puno in Peru. We arrived in Puno after road-tripping through the Andes on the straightest two lane road I had ever seen.

Llamas to the left, alpacas to the right and a whole load of nature in between.

We took the bus from Puno on the Peruvian side to Copacabana on the Bolivian Side. The crossing itself was as easy as border crossings in South America.

The equivalent of $5 (US) will buy you a seat on a large organised bus to get you from Puno to Copacabana.

Leaving Puno is something I’d wanted to do since arriving. I really didn’t rate Puno as a destination. It’s cold, filled with unfinished concrete buildings and about as good looking as the inside of a brick.

Puno is located on Lake Titicaca, which is why it became our first Lake Titicaca destination. However, it is polluted and unappealing.

We spent the total of one night in Puno and an entire day exploring the markets and polluted lake shores.

Our ultimate destination would be Copacabana in Bolivia and Puno was our gateway to getting there.

In comparison to Puno on the Peruvian side of Lake Titicaca, Copacabana is a different story.

The small town has a range of brightly coloured lakeside hostels and hotels, many with rooftop restaurants and bars catering to all tastes and budgets.

Copacabana is a very tourist-centric destination, with so much geared towards pleasing the masses that visit the popular town.

Despite being packed with tourism, Copacabana still has South American culture and it’s not easy to find the gems the town has to offer.

So, yes it’s touristy but it’s small and there are enough locals and indigenous peoples that you barely notice.

Where to stay in Copacabana?

Copacabana, as mentioned is a very touristy town. There are multiple hotels and hostels that can accommodate all types of budgets.

You’ll tend to see a lot of South American (mainly Chilean and Argentinean) backpackers in Copacabana.

What to eat in Copacabana?

Like all tourist hot spots, the food is touristy in Copacabana, Bolivia.

There are some traditional restaurants in the town and a lot of traditional cuisine to be tasted. However, the bulk of restaurants all have very touristy menus with pasta, pizza and chips.

We arrived in Bolivia at the end of a 6 month trip so I can’t say I was disappointed with the tourist menus, I welcomed them. If you are expecting to be wowed by the culinary skills of Bolivia I’d lower your expectations.

Things to do in Copacabana

There aren’t too many varying things to do in Copacabana that aren’t related to the lake.

You can take one of the many boat tours out onto the lake, charter a boat or even enjoy a small fishing trip. There are jet-skis, smaller boats and pedalos also available for rent.

It was pretty chilly when we visited and I wouldn’t have been keen to get in the water, but I assume in the warmer months this is one of the more popular things to do in Copacabana, Bolivia.

We chartered a boat and went fishing for our first afternoon on Lake Titicaca. It was nice just floating on the vast lake, it’s hard to imagine how immense in size it truly is until you are looking out on to the horizon.

Speaking of the horizon, there are some epic sunsets to be seen from the shores of Lake Titicaca in Copacabana.

The island tour we chose to take was to Isla del Sol Bolivia.

Many of the islands on either side of the border are inhabited by indigenous communities. Ancient cultures, traditions and languages are present on Isla del Sol.

Isla del Sol Lake Titicaca, became our island of choice, and what a choice it was! Since visiting I’ve read that Isla del Sol is usually most people’s Bolivian highlight and I absolutely cannot disagree.

If you plan on taking any of the tours from Copacabana, you’ll want to take the Isla del Sol one.

The surreal island paradise doesn’t look like much from the boat dock but walking 50 meters to the first sandy bay is enough to win anyone’s heart.

The clear blue ocean-like waters and the light sand almost convinced me to swim, it was only the temperature that held me back.

Things to do on Isla del Sol Bolivia

The most popular things to do on Isla del Sol include taking one of the hiking routes around the island. These make exploring the island is easy.

There’s one more popular walking route most tourists choose to take, it’s the best way to take in the scenery and enjoy this beautiful island.

The road is paved and along the route there are several photo opportunities.

There is also a beach, if you’d prefer to chill and catch some rays. When I visited this had been taken over by camping tourists making a scene and a mess.

As the island of Isla del Sol Bolivia is a national park there is an entrance fee. Entrance to Isla del Sol will cost you 10 Bolivianos the equivalent around $1.50 US.

The geology and landscape is constantly changing as you walk the stone footpath, there’s never a boring moment.

Locals smile as you wander past their farms and fields. All of them spend their days growing hundreds of varieties of potatoes and beans.

Each individual just as proud of their island, home and land as the one before. I’d also be extremely proud if Isla del Sol Bolivia is where I got to call home.

I’d heard quite a few stories about the locals of Titicaca disliking the presence of tourists on the islands but I never once got that impression during my time there.

The people are all welcoming and go about their lives whilst small groups enjoy their native land.

There are many indigenous communities in Latin America. Some of which are underrepresented and many live closest to poverty. It’s not hard to see why it may be easy for some to exploit this pure and authentic way of living.

However, as a tourist in a foreign land you have a responsibility to ensure you treat each community and local with the respect they deserve.

This brings me back to the camping on the beach. Although I’m not against camping on a beach. If you do plan on doing this please remember that the communities on Isla del Sol Bolivia have been there far longer than any of us.

You are a guest, don’t forget that.