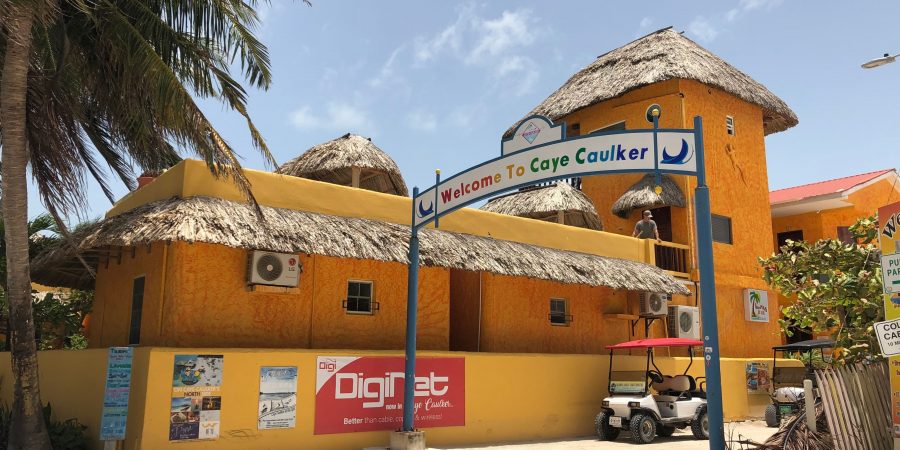 I spent 6 months in Latin America and my deepest regret was skipping Belize.

It hasn’t been easy living with this niggling in the back of my mind that kept telling me I haven’t truly experienced Central America without exploring Belize.

So, when the opportunity came knocking, I found myself on a flight to Mexico ready to finally see Belize and tick backpacking Caye Caulker off my bucket list.

The plan was to fly into Cancun, explore the Yucatan and Quintana Roo and then head into Belize for a week of island fun in San Pedro, Ambergris Caye and then finally Caye Caulker.

How to get to Caye Caulker on a budget?

Let me start with the basics. How to get to Caye Caulker.

Being the island paradise it is, this obviously takes a bit of thought and planning to figure out how to get to Caye Caulker.

With some careful planning, it’s actually quite easy and you have multiple options to choose from. Here are the most popular ways;

How to get to Caye Caulker from Belize City

From Belize City you can take one of the regular ferry services heading to Caye Caulker. A single trip will cost you around $20 Belize Dollars, which is $10 US.

There are three or four operators that serve Caye Caulker and the other islands off the Belize coast. You’ll find the boat dock located 15 minutes in walking distance from the main bus station.

A taxi is recommended at night for safety, but you can walk this in the day if you want to. Just be sure to plan your route.

How to get to Caye Caulker from Corozal

Ferries run from Corozal to San Pedro on Ambergris Caye daily. However, the Thunderbolt service and Water Taxi service run on alternate dates.

The Thunderbolt service leaves Corozal at 7:00am every day.

If you arrive in Belize from Mexico via the Chetumal border crossing you’ll want to remember that Mexico is an hour ahead of Belize.

You can purchase tickets easily on the dock. A single trip is $50 Belize Dollars $25 US or $90 Belize return.

I’m not the best on boats because I get very sick, but I found this 2 hour journey great as the weather was good. I can’t speak for all year round though!

How to get to Caye Caulker from Ambergris Caye

If you are trying to work out how to get to Caye Caulker from Ambergris Caye and San Pedro you can still take the Corozal ferry option.

Once in San Pedro you can take another 45 min ferry to Caye Caulker or fly into the small airport from San Pedro. The ferry is probably most suitable here.

Maya Air and Tropic Air operate routes from Belize City and tickets are for the most part inexpensive. The planes are small but the journeys are really quick.

You can also use this option to fly between Caye Caulker and Ambergris Caye if you want to.

A single trip from Belize City can cost as little as $40 US which is around £36 for us Brits.

If you are backpacking Caye Caulker on a budget it’s likely you’ll want to look for the cheapest option which is usually the ferry.

In terms of your overall experience, the flight isn’t much more expensive but probably a lot more bucket-listy.

I would recommend taking the flight if you can!

Now that we’ve covered the different options on how to get to Caye Caulker, you can start to enjoy what the island has to offer.

Once you get to Caye Caulker is when your adventure really starts!

Backpacking Caye Caulker on a budget

First of all, if you’re expecting a colonial Central American setting or a Mayan rich heritage in Caye Caulker you will be bitterly disappointed.

The go-slow, island lifestyle here is simple and easy. It very much reminds me of Utila, Honduras a similar island off the Central America/Caribbean coast.

Belize itself is the youngest of the Central American nations and does have a different vibe.

Saying that it still has the same rich and diverse cultural history as the rest of Latin America it just often feels out of place surrounded by its Spanish speaking counterparts.

Perhaps I wouldn’t have enjoyed Belize or backpacking Caye Caulker as much I did and this is why I suspect some bloggers have a negative opinion about the island.

Personally, I adored Caye Caulker. The Caribbean vibe and go slow mentality is nothing short of infectious. The island radiates good times and fun.

There is always a chilled Landshark waiting for you or a friendly local to offer you some words of wisdom.

If you are planning on backpacking Caye Caulker as part of a Central America trip or other, you have likely already heard it’s expensive.

Belize and Costa Rica are undoubtedly the most expensive Central American countries to visit. Everyone will tell you this. However, that doesn’t mean you can’t see Belize or Caye Caulker on a budget.

There are bargains to be had from many Caye Caulker accommodations especially if you travel in the offseason from March – to September.

Sleeping will be your biggest cost, but many hotels and Caye Caulker hostels reduce their prices in the off season.

The off season is usually between March – September and falls during the European Summer time.

Most people avoid backpacking in Latin America during those months due to the heat. However, if you are hoping to see Caye Caulker on a budget then these months are best.

There are actually loads of Caye Caulker accommodations to choose from despite the tiny size of this island. Some of the most popular and best value for money are listed below.

If you decide to backpack or see Caye Caulker on a budget and have a tight budget you’ll probably want to stay in a hostel.

There are limited hostels on the island vs. hotels but the below Caye Caulker hostels are by far the most popular on the island.

If you don’t want to stay at Bella’s it’s a great place to drink and party with other backpackers.

We stayed in a private cabana at Barefoot Beach. For 3 nights it cost just over £100 for two people around $140 US.

For this price, we had a private cabana with aircon, our own private bathroom and got free bikes to use during our time in Caye Caulker.

Barefoot is a little further down the beach from the main bars and The Split, which may suit you or not.

Things to do in Caye Caulker

Caye Caulker, being an island, has an abundance of water-based fun as hell activities for anyone backpacking Belize.

Snorkelling and diving are hands down the best things to do here.

Caye Caulker diving is some of the best in the world and many people choose to visit Belize purely for this reason.

We arrived in Belize at the perfect time. The annual Lobster Fest on Caye Caulker was about to begin. Lobster Fest happens at the same time each year.

We’d have just enough time on Ambergris Caye to soak up the island vibes before getting to Caye Caulker.

Arriving in time for Lobster Fest I’d 100% recommend it. Picture some hundred barbecues and some several hundred locals all dancing to Soca and drinking local beer.

You have Notting Hill Carnival-style sound system and enough freshly cooked lobsters to feed the masses.

If you are us, you also get a storm and a power cut. But thanks to the generators the party never stops.

Whether you want to dive the blue hole as part of your Caye Caulker diving experience or just want to check out the incredible reef, you’ve come to the right place.

The Belize Barrier Reef is part of the Mesoamerican Barrier Reef System that spans all the way down to Honduras and beyond.

Caye Caulker diving is often regarded as some of the best in the world, as the reef system is now in the top spot, closely followed by the Great Barrier Reef in Australia.

On a good day you can dive with Nurse Sharks, Stingrays and Moray Eels.

If you don’t dive but want to learn then Caye Caulker is the perfect place to get your PADI.

There are a wide range of professional dive schools to choose from and what better place to qualify as an open water diver?

A dive trip will set you back between $150-$200 for two tanks, the reef has loads of great locations and lots to see so it is a very worthy investment.

Lots of Caye Caulker diving excursions include lunch and sometimes drinks for after the dives.

If you don’t dive that isn’t a problem. There are hundreds of different options for snorkelling the reef and clear blue waters of the split.

If you are backpacking Caye Caulker on a budget, you can do this for free providing you have your own equipment.

If you travel with your own snorkel and mask you can head straight to the split and head out past the sandbanks or around the mangroves near the North Island.

My absolute favourite thing to do in this world is laying in the sun by the ocean. The Split in Caye Caulker offers just that.

With two popular beach bars Sip and Dip and the Lazy Lizard you can easily spend 12 hours in the sun by The Split drinking Landshark’s and chatting to travellers, expats and locals alike.

Speaking of booze the nightlife in Caye Caulker is a lot of fun and probably one of my favourite things to do in Caye Caulker. The go to spot for pre-drinks is Bella’s backpackers.

After a day at the Lazy Lizard you can expect to find people with a bottle of supermarket local rum at Bella’s. Most people then move on to Sports Bar and then Reggae Cafe.

This isn’t just a popular little bar crawl for tourists and expats, plenty of the locals love Sports Bar and Reggae Cafe.

In fact, during my time in Caye Caulker I literally felt no divide at all between the locals and tourists on the island. I suspect English being the official language of Belize helps this.

The below daily budget is based on two people sharing a private cabana in Caye Caulker including drinking and eating.

For ease all prices are in US dollar – just double them for Belize dollar!

The average daily budget is around $135 ($70 per person) based on the maximum budget for eating and drinking and no excursions.

Sleeping can be cheaper if you choose a hostel dorm option. Our Caye Caulker accommodation cost $140 for two people for three nights making the per person, per night cost $23.

Eating can be pricey, but if you want to eat like the locals you can.

There’s plenty of pop-up bbq’s near the beach cooking whole lobster with rice and slaw for around $15 per person.

For budget travel try to book one of the Caye Caulker hostels that offers a free breakfast.

For drinking stick to local beers, Belikin and Landshark are the most popular and are much cheaper. Local rum and mixers are also relatively inexpensive.

But rum and your own mixers from the supermarket to save on costs.

The good thing about backpacking Caye Caulker on a budget is that everything is in walking or cycling distance so you don’t have to pay for taxis and transport!