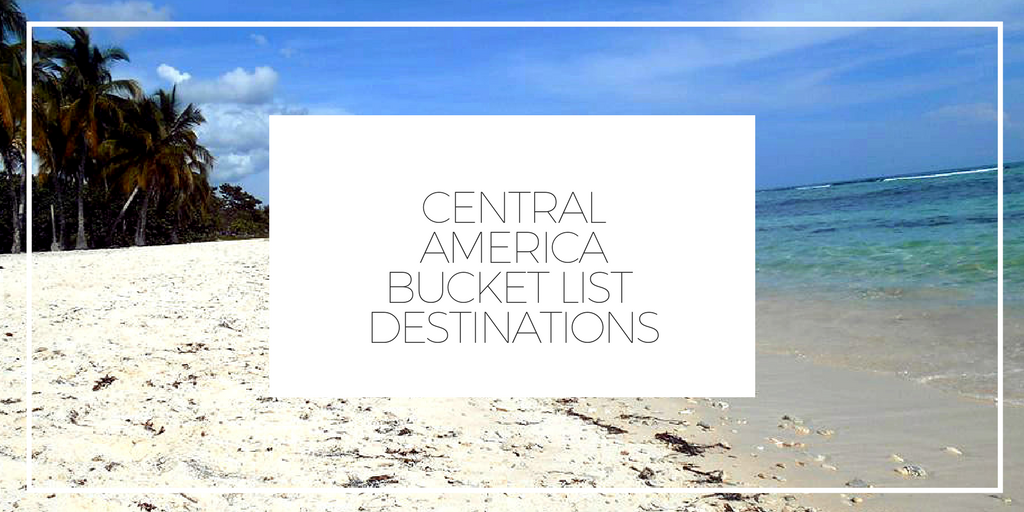 This tropical paradise is filled with cities, towns and coastal resorts to suit all tastes and budgets.

If you’re planning a trip to this incredible part of the world and need a little inspiration on the best places to visit in Central America, this one is for you.

Depending on what kind of adventure you want, you might not always know the best bucket list destinations to add into your itinerary.

I have no shame in saying I adore Central America. The people, the food, the culture, the colours and even the heat.

After spending several weeks in this area I managed to see every country in the region minus Belize.

I then returned to Costa Rica to explore some more as part as a separate trip to Guanacaste Province.

It’s likely that Central America will be an area I continue to return to and I’ll keep adding places to my Central America bucket list destinations. I know I will visit Belize as it was missed.

Here are all the best places to visit in Central America for a budget trip.

The best places to visit in Central America

Lake Atitlan, the lake that keeps on growing. In fact, Lake Atitlan or Lago de Atitlan is expanding so rapidly that its eating up most of the low laying shoreline around the lake.

This is evident through the quantity of abandoned buildings on the lake edge that you can kayak through. I know this, because it’s exactly how we spent one of our days on Lake Atitlan.

Arrive via Panajachel but don’t stay too long. It’s overpriced and there is a lot of Central American hustle from boat owners and market stall owners. Head to San Marcos or San Pedro, we visited both villages but stayed in San Pedro.

If you like socialising, drinking and lots of fun head directly to San Pedro. If you’re looking for something more chilled and enjoy yoga and the hippy lifestyle then head to San Marcos.

Alternatively, split your time between both of the lakeside villages as Lake Atitlan is absolutely one of the best places to visit in Central America.

Unmissable thing to do: Visit more than one of the lake side villages. Add the ‘trampoline’ in San Marcos to your bucket list. It’s a jumping platform where you can sunbathe around the lake and jump into the waters of Lake Atitlan.

Think city break at the base of an active volcano with enough adventure options to keep you occupied for weeks. All of which, situated around classic colonial Parque Central which has the title of UNESCO World Heritage site.

This is the city of Antigua, Guatemala – an absolute tourist favourite and must visit when in Guatemala.

If that doesn’t sound like excitement enough add the prospect of being able to climb to the top of Acatenango. Which is another of Antigua’s famous less active volcanoes. From Antigua you can literally  camp on the side of Acatenango whilst watching Volcan Fuego erupts beside you.

Many tour operators and travel provides across Antigua and Guatemala offer packages to climb Acatenango. If this is your thing then Antigua is definitely a Central American bucket list destination for you.

If you plan on exploring Guatamala for a long time you’ll want to consider the below best places to visit in Central America. Both are popular backpacker favourites;

Yes, you heard me right. I have just said San Salvador. An ex-murder capital of the world turned thriving cosmopolitan city with an American inspired diner restaurant on every street corner.

We spent a few nights here, arriving from the tropical El Salvadorian coast and San Salvador became one of those captivating cities of Central America you always wish you had spent longer in.

I’d go back to El Salvador although I suspect most cities in the USA look and behave exactly like it. That’s why El Salvador makes this list of best places to visit in Central America.

There may be heavily armed security guards on the door of every fast food restaurant but it just signifies how far El Salvador has come as a country. No longer at the streets ruled by gangs and drug lords, tourists can explore free.

Granada is simply a city you could never get bored of. It is stunning and if the heat wasn’t unbearable I could see myself living in a city like Granada, Nicaragua.

The daily beat of a city as energetic as Granada is enough to capture the heart of any tourist. The bold architecture and strong cafe and bar culture makes any amount of time spent in Granada fun-filled and enjoyable.

From Granada you can easily visit other great attractions and also head into Costa Rica if you’re only planning on visiting one other country.

Backpacking Nicaragua is very easy and also budget friendly. It’s probably worth pointing out that along with Granada, as a whole Nicaragua is one of my favourite countries to explore.

A rickety boat will take you to Moyogalpa where you’ll be greeted instantly by tourist information and hostel owning locals. The island, despite its popularity with tourists only holds so many at a time due to the strategically timed boats.

Spend a couple of days on Isla de Ometepe and rent a scooter to explore the island’s gems on its only road.

Make time to visit Charco Verde and listen to the monkeys in the trees as you walk below the canopy.

Unmissable thing to do: Explore Laguna de Apoyo, you can easily take public transport to this crater lake and nature reserve. There are hostels and restaurants her so you can spend more than a day in this Central America bucket list spot.

The Panama Canal differs from all destinations on this bucket list simply because it’s more of a must see attraction than a bucket list destination in Central America.

It is definitely worth spending one or two nights in the capital of Panama to visit The Panama Canal.

Finished in the early 19th century, The Panama Canal took many years and many lives to build. This engineering masterpiece joins together the Atlantic and Pacific Oceans and divides Latin America in two.

Visit the Miraflores Locks and visitor centre and join the other tourists on the viewing balconies to watch a ship pass through a continent via the Panama Canal.

I still dream about Utila and the relaxed beach vibes I felt there. Nowhere I have ever been comes close to being similar to the tropical Caribbean hideaway of Utila, The Bay Islands.

For it’s unique geography, this part of Honduras falls into many peoples Central America bucket list.

The Bay Islands are a scuba diving hub. Many backpackers head directly to The Bay Islands avoiding Honduras’ dangerous interior to get their PADI Open Water Dive certification.

Unmissable thing to do: Stay at a dive centre on Utila, Honduras for a week and get your PADI Open Water Diver certification or if you already have it, why not improve your skills and up your certification? Serious bucket list stuff.

You are probably wondering why this bucket list only includes San Salvador and Panama City. As with Europe travel capitals are usually the most notable destinations.

There’s a reason for this and a bit of a rule for travelling Central America.

Generally speaking we don’t talk about Central American capitals because the rule usually is don’t visit them.

When it comes to cities like Tegucigalpa, Managua and Guatemala City they can be polluted and dangerous for tourists.

There aren’t many places of interest within these cities for tourists, so unless you need to take a bus or visit an embassy it’s usually wise to avoid them. The best advice I can give is to plan your route through more tourist friendly Central American cities.

Skip the capitals. There are far more Central American bucket list worthy places you should be considering.

In summary, Central America is an area filled with bucket list destinations and absolutely unmissable things to do.

Some of the best places to visit in Central America are very accessible in a region so small. This makes travel here very easy.

Try your hand at diving, or take some Spanish lessons and stay with a local family for a week. In an area so diverse and filled with endless possibilities Central America really is your oyster.

You can explore coast to coast and everything in between whilst discovering the true wonders of Latin culture and history.