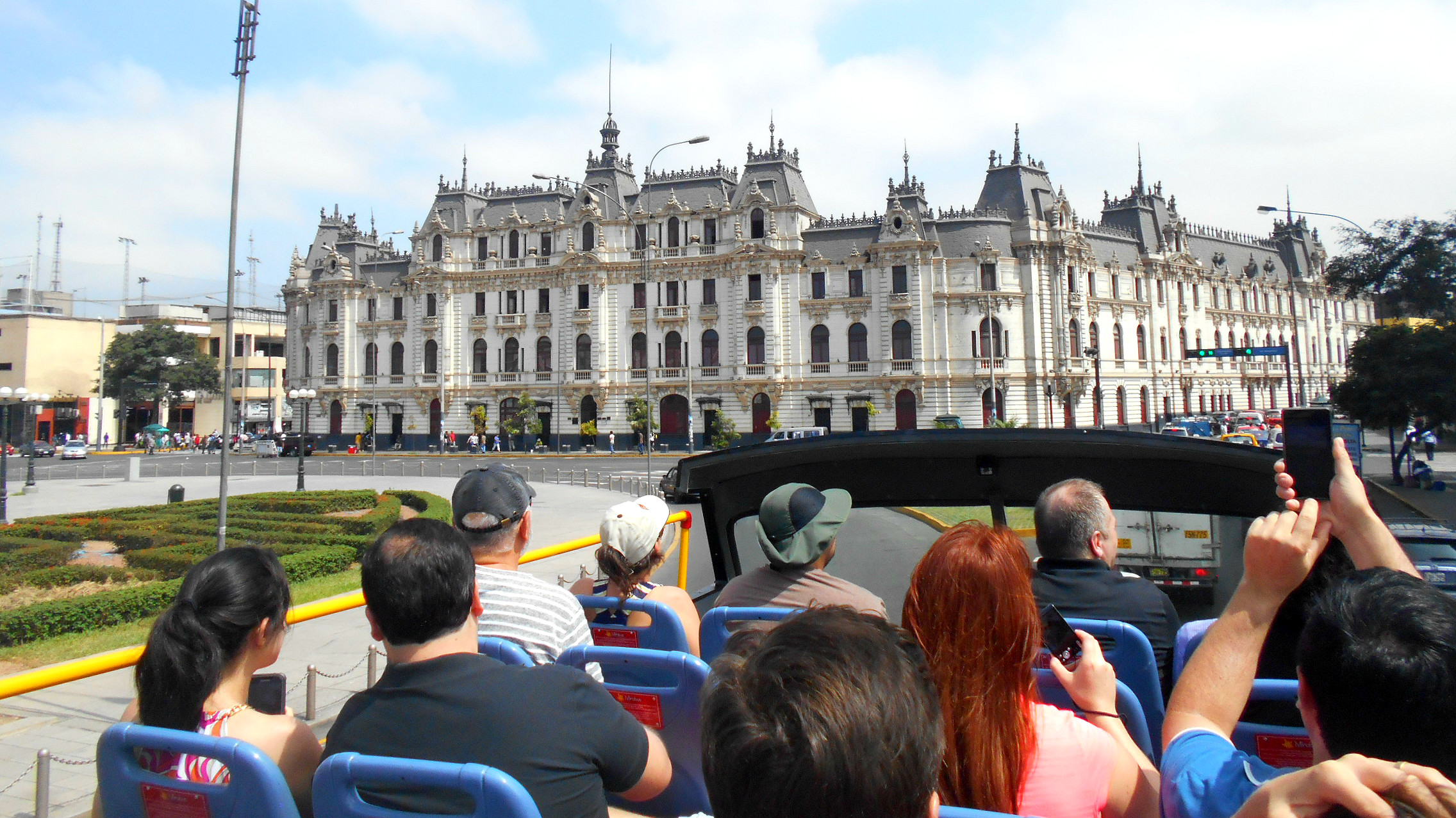 A month in Peru would not be complete without backpacking Lima – the capital on the coast.

There are so many things to do in Lima, that you’d be silly not to visit.

With an abundance of great buildings to see and a wild range of things to experience, the city of Lima bleeds Spanish culture.

Of all the colonial cities in all of the Spanish colonial countries we’ve visited in South America, Lima is by far one of the most impressive.

The city is big, vibrant and there’s no shortage of character. It actually has buildings in every shade of yellow you could dream of with architecture you could photograph for days.

The capital on the coast

Lima, Peru is located on the pacific coast of South America. It’s a popular and busy city for tourists and locals alike.

The city of Lima is one of South America’s largest cities and has a population of 9 million people. Although not as large as Mexico City, Lima is actually the third largest in South America.

We actually spent almost a week in the city of Lima as there was so much to do and see. I would recommend no less than 3 nights in Lima if you really want to experience this Peruvian gem.

Travellers can arrive easily to Lima overland or via air travel. We arrived from Northern Peru, which is very doable.

Cheap flights to Lima are not unheard of and although flights within Latin America can be pricey I use Skyscanner to find all my cheap flights.

We arrived from Mancora Beach in the north travelling down past Chiclayo and Hunachaco.

There are a wide range of long distance busses in this part of the world making the Peruvian pacific coast easy for backpackers.

Where to stay in Lima

There are a few tourist areas in Lima you’ll want to get to know. Miraflores is the place most backpackers stay and you should look for accommodation in this area.

Miraflores is home to some of the best things to do for people backpacking Lima so you’ll want to be close to this area.

In terms of where to stay in Lima, we actually stayed in three different accommodations during our week in the city. For hostels you should check out;

Loki is a famous and popular backpacker chain in South America. I’d already stayed in one in Mancora, so after a couple of nights enjoying the rooftop bar at Puriwasi we decided to check into Loki.

We also stayed in Casa Suyay for a couple of nights which is a little more up market that the previous two hostels. This accommodation is probably less suitable for backpacking Lima.

Things to do in Lima

There are loads of things to do in Lima, it is a truly incredible and captivating city. The large cosmopolitan vibe of the city is really infectious and you can’t wait to get out and explore once you arrive.

The historic centre is one of the must visit places and things to do in Lima.

The Plaza de Armas is bursting with life, contrasting cultures and a temperature that almost sweeps you off your feet. The architecture is extremely well preserved.

Some of the notable places to see are in Lima’s historic centre are;

Plaza San Martin named after one of Peru’s revolutionary icons is the second of the grand plaza’s in central Lima and a must see.

The one thing that stood out to me about the historic centre of Lima is the absence of a large crowd.

You tend to find in popular zones in large cities there’s an overwhelming feeling of overcrowding.This isn’t the case in Lima, making long periods of time in the central zone much more enjoyable.

We actually took a Mirabus tour in Lima which is the same as a City Sightseeing tour in Lima. It was a little more expensive than I would have hoped to pay but totally worth it for the 360 views of the city.

Booking online will tell you tours start from £10, but in reality you are looking to pay around £40 for two people to take a city tour of Lima. This is the same for Mirabus and City Sightseeing.

The bus leaves from Miraflores by the popular Parque Kennedy everyday so it’s easy to hop on and off if you need to. Most of the guides are English or Spanish speaking so the choice is yours.

I would recommend this as it was one of my favourite things to do in Lima, especially as it made getting around in the chaotic traffic much easier.

If you are backpacking Lima you may have a limited budget, but I would say this is worth it!

We also visited the Gold Museum, which is surprisingly rated one of the best things to do in Lima. It’s as odd as anything but lots of impressive artifacts and World War Two memorabilia – your gal loves WW2 history.

It’s a little outside of town and it will require a taxi to get here, but is you have some time to spare I would recommend.

Inside the Museum of Gold or Museo Oro del Peru, there is almost too much to see at once including all the Inca gold on show.

I’ve mentioned Miraflores a couple of times already without doing the area justice so here goes. Miraflores is one of the more popular districts of Lima.

You will find Miraflores located south of downtown Lima and close to the ocean. Many tourists and anyone backpacking Lima will choose to stay int his area as most hostels and hotels are located here.

Things to do in Miraflores Lima

There are so many things to do in Miraflores and Lima alike, that you could easily stay here for weeks.

Miraflores is similar in atmosphere to the Zona Rosa in Medellin, Colombia. It’s vibrant, young and fun neighborhood that attracts Europeans and backpackers because of the abundance of things to do here.

Whether you want to enjoy the upmarket shopping in Miraflores, go out drinking, spend your day at the beach or eat our every night then this are is ideal for you.

Although the historic centre of Lima is undoubtedly the most impressive part of the city, Miraflores is great for other reasons.

Before we arrived in Lima research informed us of a very special street described by previous tourists visiting Lima as ‘Pizza Street’.

Miraflores also boasts a wide selection of restaurants with various cuisines catering to various budgets and there’s always a Burger King within walking distance if you fancy it.

Pizza Street in Miraflores, Lima doesn’t just offer Pizza, there’s a range of other cuisines an Irish pub (obviously) and even a couple of clubs.

Pizza Street is one of the must see things to do in Lima even if it is a little over priced compared to the Menu del Dias available. You will look to pay over the average price of a set menu on Pizza Street but the food is great!

Along with a trip to Pizza Street there is one other key thing you must do in Lima. That is, visiting Cat Park.

Parque Kennedy is the Central Park of Miraflores and is often referred to as Cat Park. You don’t need to be a genius to figure out why, but I’ll give you a hint… kitties!

Its always busy in Cat Park and occasionally you can catch some shade and play with a kitten.

The City Sightseeing tour bus leaves from just outside Cat Park which is perfectly located just across the road Pizza Street.

The walk down to the ocean and along the Malecon in Miraflores is another of the top things to do in Lima. I honestly couldn’t recommend this more as it became something we did every day.

Lima is home of lots of great sunsets and the strange ocean walk promenade makes watching the evening surfers and sunset much more of a unique experience.

The whole of the Malecon area in Lima is extremely well kept and verging on superficial, but it’s policed and safe and kind of peaceful.

The beaches in Lima aren’t worth a thought as they are rocky and small but the waves are dangerous and fun to watch.

On the oceanfront there are a few things to see and do. There is a small pier with a few artisan shops and a gorgeous restaurant to visit.

We were lucky enough to check out La Rosa Nautica more than once during our time in Lima. The views from the restaurant on the pier in Lima are pretty impressive the Pisco Sours here are amazing too!

One of the ultimate things to do in Lima is try a Pisco Sour. It’s a cocktail made with egg white that is very popular in Chile and Peru.

The main ingredient is Pisco, which also comes from this area.

Drinking and eating in Lima

I’ve already referenced Pisco Sours, but I can’t discuss drinking in Peru without a reference of Inca Kola.

During my time in Peru and Lima I became utterly obsessed with Inca Kola, its filled with sugar and all the things that are bad for you.

Menus del Dias are everywhere, these are the great value set menu lunches you can find all over Latin America. This is a great choice if you are on a budget or are backpacking Lima.

Expect to pay between 7 Soles and 19 Soles for the Menu del Dia in Lima. The best places to eat are located in downtown Lima and away from the main tourist areas of Miraflores and the historic centre.

It shocked me to see no increase in the price of the ‘Menu del Dias’ around the plaza. Only 10 Soles for two courses and a drink, who can argue with that?

Often the price doesn’t always reflect quality, some of the cheaper ones are actually much tastier! Look for an Almuerzo sign which means lunch in Spanish.

This is an odd point to make but traffic in Lima was the worst I encountered in South America. This makes getting around Lima difficult.

As mentioned the city is large, so some places are only accessible by taxi or public transport.

It’s worth mentioning this because we spent a lot of time annoyed at the roads or being stuck in traffic in Lima. You will want to avoid travelling at rush hour and only take taxis when you need to.

If you are backpacking Lima or are short on time, taxis aren’t always the best option anyway.

Most things in Miraflores are in walking distance and if you take a Mirabus tour to the historic centre like we did, you’ll only need to worry about traffic on the way there and back.

3 thoughts on “Backpacking Lima, Peru – The capital on the coast”