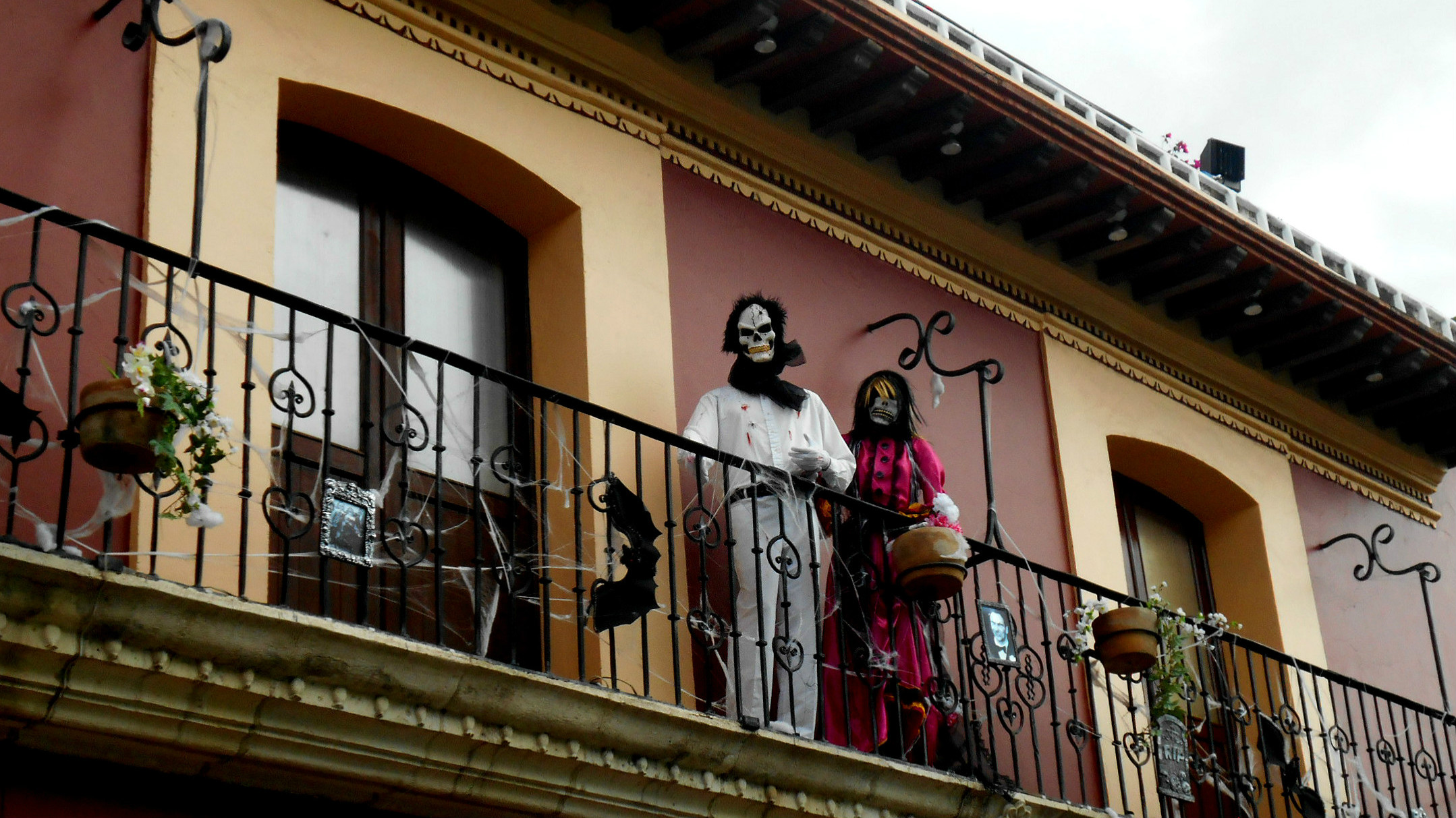 Our journey for Day of the Dead in Oaxaca City, Oaxaca, Mexico was a memorable one.

In fact around sunset somewhere in a desert-like landscape we realised our bus driver was lost.

We had no phone signal and the only person who knew we’d taken that particular bus was a relative who was now several hours in the other direction in Huatulco.

We had hoped to reach Oaxaca City before nightfall but that was looking doubtful. I guess this became my first lesson in Latin America transport.

Our route through Mexico

Before I get back to the story of our journey to Oaxaca City I should give some context of our backpacking route through Mexico.

We’d spend a full 5 weeks in Mexico starting in Cancun and Merida then travelling north before finally travelling back through Chiapas.

From Merida in the Yucatan area we flew to Mexico City, visited Guanujato for Cervantino Festival and then travelled further and inland to Puebla for a while before hitting the Pacific Coast.

We had travelled some length of Mexico’s pacific coast and after some time in the surfing paradise of Puerto Escondido we spent a week in Huatulco.

Huatulco is a small yet popular town on Mexico’s pacific coast line and popular with many American and Canadian tourists.

During my time in Huatulco I was fortunate to stay with a relative of Jamie’s. We spent 7 lazy days enjoying Mexico’s finest in the heart of the Pacific Coast.

From dolphin sightings on our 7-bay day tour to lazy afternoons around pool, every second spent in Huatulco was filled with fun. But, like with any destination, before we knew it our time of relaxation and rest in Huatulco was over.

We visited Huatulco just before the end of October. Our route through Mexicowould take us to one final destination to experience Day of the Dead Oaxaca City style.

On our final morning in Huatulco we booked a shuttle service to Oaxaca. We’d heard from locals that the winding roads were very dangerous and generally inaccessible for larger busses. Shuttles are favoured for this journey.

The journey from Huatulco to Oaxaca City takes around 6/7 hours in a shuttle bus. The shuttle takes you directly up a sloping mountain range before heading back down to Oaxaca City.

The roads are winding and tough for anyone who suffers with travel sickness, believe me.

Back to the story

Like I mentioned earlier, at around sunset we began to realise our bus driver was lost. The driver had taken a few wrong turns. He was a little distracted and the roads didn’t really look like roads much.

Eventually, our driver frantically called some friends and stopped some locals and we eventually arrived in Oaxaca City. This is something I later learnt can be expected throughout Latin America.

Oaxaca City is located in central Mexico and often known as Oaxaca de Juárez. It is the capital city of the state of Oaxaca which is a large central state in Mexico.

Oaxaca City is an extremely popular tourist destination within the central Mexican valley due to it’s rich culture and history. Oaxaca is known for it’s Mixtec and Zapotec history along with it’s close ties to Day of the Dead celebrations.

Day of the Dead is widely celebrated in the state of Oaxaca. This is one of the reasons we timed our visit around this.

Things to do in Oaxaca City

One of the things I loved the most about Oaxaca City is its cafe culture and nightlife.

There is a bar, cafe, pub and restaurant on every street. Most evenings we would go to a rooftop bar and wait for things to really liven up. Check out the below rooftop bars;

These are all Facebook pages, but should give you a picture of how incredible these spots are in the Oaxacan Sun.

The actual nightlife in Oaxaca is fun, especially during late October and around Day of the Dead.

Because the city is so busy there is lots going on and the streets and bars are packed. It’s pretty budget friendly to drink in Oaxaca City and beers and cocktails in most bars are reasonably priced.

You can also grab a tequila or mezcal for cheap too – it’s a tradition in Mexico after all.

We spent so much time exploring eateries and trying the various cuisine available in Oaxaca City. There is a wide range of traditional and fusion cuisine to try.

Menu del Dias are plenty – which is a common budget favourite menu of the day option locals love. Most, if not all of the locally ran businesses are reasonably priced and the food is filling and tasty.

Expect to eat rice, beans and meat or usually something else for veggies usually pasta. Most set meals come with a drink and even sometimes a desert.

Whilst in Oaxaca were even able to visit a traditional Mezcaleria. We were able to sample some Mezcal, something the region is well know for.

We only had small samples but the contents literally blew our heads off! Its pretty fiery.

Sampling the Mezcal is something so many people suggested to do whilst in Oaxaca City, a stronger version of Tequila from the Agave plant.

If you are spending Day of the Dead in Oaxaca City don’t worry. There are still plenty of incredible things to do, this includes a day trip to Monte Alban.

Monte Alban is a popular a pre-Columbian archaeological site just outside of the city.

Monte Alban was the final archaeological site we would visit in Mexico. We has seen the pyramids of Cholula and more well-known Chichen Itza and a couple of others inbetween.

It’s very easy to get to Monte Alban from the main city. Several busses leave from several shuttle organisations just off the main streets. The bus takes approximately 30 minutes.

Why you should visit Monte Alban

I have to say Monte Alban has the most breathtaking views. In the shuttle on the way to the site you seem to go up for what feels like a very long time.

Upon reaching the summit you don’t realise how high up you are, until you see the views. The views are one of the main reasons Monte Alban is a must visit.

Monte Alban is free of hustlers and people selling artifacts, which as annoys me a lot but comes part and parcel with travel.

The site is quite small compared to others. We walked the site several times following the ancient paths and trying to follow the signs. It’s definitely worth the day trip and I would absolutely recommend visiting Monte Alban when in Oaxaca City.

Day of the Dead, Oaxaca City

Oaxaca Day of the Dead celebrations

When we first arrived in Mexico we knew we’d be close to leaving by the time Day of the Dead came around. Oaxaca Day of the Dead traditions are something we knew about before arriving in Mexico.

As the month of October grew shorter we began to see promotional material for Dia de los Muertos. This got us excited.

Each day we spent in Oaxaca City was spend embracing the culture and festivities leading up to the main events of Day of the Dead. Oaxaca Day of the Dead celebrations are not unique but it is one of the largest sates to celebrate the tradition.

During our time in Oaxaca City we began to see more and more costumes as the festival began. Dia de los Muertos consists of three key days. All Saints Eve, All Saints Day and All Souls Day.

Another great addition to being in Oaxaca City during the Day of the Dead Festival and leading up to the celebrations are the amazing decorations.

Each house and public space has its own range of Day of the Dead themed decorations. From marigolds and candles to skulls and coffins. Every day the streets are bustling and lively because of the large number of tourists packed  into the city wanting to witness the festivities.

Why you should spend Day of the Dead in Oaxaca

Oaxaca’s Day of the Dead traditions are not unique and happen in various towns and cities throughout Mexico. You’ll find Oaxaca State listed as one of the best places to experience the celebrations.

During the Festival of the Dead we got to see so many parades, visit so many pop-up markets and see so much live music.

Parades are often some of the best part of experiencing Day of the Dead Oaxaca City. You’ll want to make sure you are in the main city centre around noon each day for when they start.

There are so many Day of the Dead different performances in various locations throughout Oaxaca City from October 31st – November 2nd.

The 3 days of festivities all stand for something different. We found ourselves in the crowds of many dance shows with traditional Mexican music playing out into the streets. The costumes are possibly my fave part!

As part of our Oaxaca Day of the Dead experience, we spent Halloween (All Saints Eve) in a cemetery.

Being around people filled with nothing but joy because of their respect for death as a ‘rite of passage’ really helped me understand Day of the Dead.

It only took a small amount of wandering the cemetery and trying to remain respectful before I began to realise that nobody cared if I was.

Locals were dressed in Day of the Dead costumes. Most families celebrated late into the night in the Oaxacan cemetery.

Being in San Miguel Cemetery with the residents of Oaxaca City opened my eyes to a new cultural understanding of Mexico.

Orange marigolds are the official flower of the dead and you should expect to see them during your time in Oaxaca City.

Along with marigolds, expect to see food vendors and amusements also. There is practically a small carnival which lines the outer walls of San Miguel Cemetery in Oaxaca City.

Honoring the dead and death as a rite of passage means something especially different to Mexicans than what it does to my culture.

It was an incredible feeling to be part of something in San Miguel Cemetery that was so distant to my own cultures ideologies about death and the purpose of a cemetery.

Why you should visit Oaxaca City in Mexico

As a stranger I felt so welcome in Oaxaca City. It’s such a captivating place to be and the locals only add to that.

We got to witness some fabulous weddings with celebrations spilling out into the midday sun whilst in the city. This made me feel really part of Oaxaca. Everything you experience is so energetic and that energy is infectious.

I felt so at home in Oaxaca City. I certainly believe I’d have this feeling no matter what time of year I visited. Oaxaca City is a gem of Mexico and a must visit!

5 thoughts on “Day of the Dead in Oaxaca City”