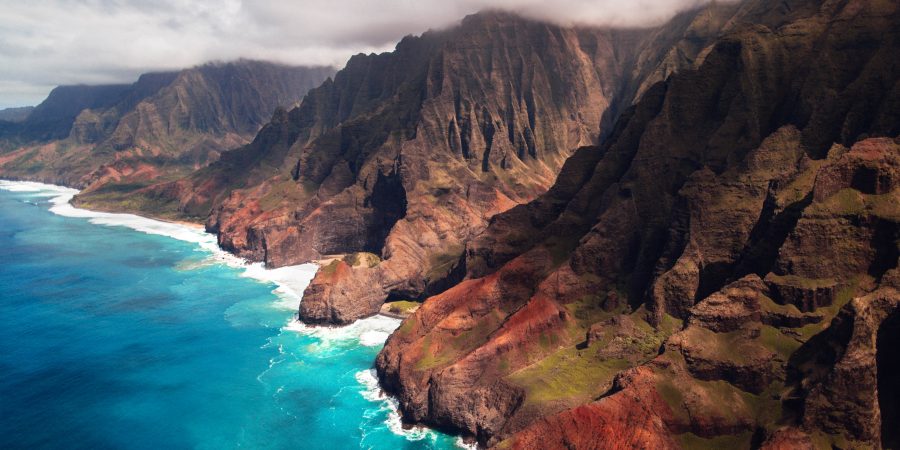 Its not often I’m inspired to write a dream itinerary, but recently I’ve been dreaming about Hawaii. The volcanoes, the beaches, the culture and more.

With a rich bio diversity, cultural history and tropical climate Hawaii is often the top of everyones bucket list and features on many ‘once in a lifetime’ trip itineraries including mine.

Here’s my dream itinerary for Hawaii;

Generally speaking, and not so sound ignorant it’s easy to forget that Hawaii is in the USA. Maybe that’s a good thing? Made up of 137 islands, located deep in the Pacific Ocean this is US state is unlike any other.

Littered with active volcanoes you can climb, stunning reefs and scenic waterfalls. Hawaii the is most breathtaking of countries packed with open spaces and nature.

Regardless of whether you are keen to stay on land or want to head offshore to dive some of the great dive sites in Hawaii. The islands pretty much have it all and epitomise a tropical paradise for most.

Spread over an incredible 1,500 and as mentioned with a total of 137 islands of all shapes and sizes, the Hawaiian archipelago is a destination I frequently dream about.

Whether you sunbathe, surf, live for adventure or other Hawaii seems to have it all so it’s really no wonder I’ve found myself dreaming up this itinerary for two weeks in Hawaii.

Let’s get to it – here’s my dream travel itinerary for Hawaii packed with things to do in Hawaii and more.

Stop 1 would be Honolulu, obviously. The Hawaiian capital on the main island of O’ahu would naturally be top of my dream itinerary or bucket list.

You can fly from both London and Manchester to Daniel K. Inouye International Airport for as little as £500 if you book in advance.

Virgin Atlantic fly (indirectly) to Honolulu from the UK so you can always compare flights like this if you are a confident travel booker. But if you are looking for an all inclusive Hawaii trip you’d be better browsing the market.

Whether you plan on heading to a resort via the all inclusive option or plan on spending some time in downtown Honolulu it makes sense to start your dream itinerary on the island of O’ahu and specifically the capital.

Make sure your time in Honolulu is packed with a list of restaurants and authentic traditional dishes to eat. The cuisine on the main island is some of the best in Hawaii and also home to Honolulu’s best restaurants.

Although Honolulu is undoubtably the most well known destination in Hawaii, it would be wrong of me to neglect the island that it is situated on.

As mentioned, Hawaii’s capital Honolulu is located on O’ahu, the largest island in the island group.

Known for adventure travel, great beaches and local history there are so many things to do in O’ahu aside from visiting the diverse capital Honolulu. For divers, you can check out some O’ahu Scuba Diving to make the most of a once in a life time trip. This would certainly be on my Hawaii bucket list.

During your time on O’ahu, you’ll have plenty of time to check out the nightlife, restaurants and get to know some of the locals – Aloha!

The main languages in Hawaii are Hawaiian obviously followed by English, meaning as an English speaking tourist in the most unique of the US states, travel and getting to know the locals should be pretty enjoyable.

As I mentioned with Honolulu, when it comes to eating and drinking, you’ll be spoiled for choice with an abundance of stylish fusion and local restaurants to choose from.

When planning a two week dream itinerary for Hawaii then make sure you research the best places to eat!

If you are looking to step away from the dazzling lights and touristy streets of O’ahu then head to Kauai. As the northernmost of the large Hawaiin islands Kauai is often forgotten among tourists for more popular tourist destinations in the region.

Described as nothing more than an island paradise, you can easily fly with the local airline Hawaiian Airlines between islands to ensure you have enough time to explore.

Known officially the ‘oldest’ of the Hawaiian islands, the 4th largest is known to be the first landing place of James Cook during his exploration of the New World.

With culture mixed with history, I’d spend my days getting to know Hawaii and the indigenous cultures on the island of Kauai as stop 2 on my dream itinerary.

Next up for me would be Maui. You can fly from Kauai to Maui via. Honolulu, so perhaps I’d need to work on my logistics a little better for a two week or shorter trip to Hawaii.

I’be heard that for a two week Hawaii itinerary you do not want to miss this tropical paradise and its incredible beaches.

As one the second largest of the islands on this dream itinerary, it’s recommended to end your trip here for a bit of relaxation on the white sands of the peaceful beaches.

One of the main resorts on the Hawiian island of Maui is Lahaina, a resort that is held in high regards by anyone who’s had the privilege of visiting Maui.

Classed as one of the oldest towns in Hawaii with over 1,000 years of rich history, Lahaina Town should feature on any bucket list for Hawaii for this alone. Located on the waterfront, the town has been described as packed with character.

Maui is home to the Haleakala National Park and a wide range of natural life including frequently visiting green sea turtles. Anyone that knows me knows I love turtles so I’ll be exploring for that reason alone.

The main ‘Island of Hawaii’ often known better as The Big Island would be an unmissable stop on a dream Hawaii itinerary.

For anyone looking for the ultimate Hawaii experience, check out the Kohala Coast where all the best resorts are.

If I had two weeks to explore I’d spend the last few days of my trip soaking up the sun and vibes of The Big Island at one of the beach resorts on the Kohala Coast located on the west coast of the Island of Hawaii.

Kukio Beach would be my beach of choice

The Big Island is the farthest south, so could be a great starting point for a trip. You could travel north from the Island of Hawaii to Kauai, O’ahu and then Maui.

As someone who really loves being in the tropics, the tropical temperatures of Hawaii sound very attractive to me.

Whenever I’m researching new and exciting destination I always factor in the climate. Temperatures are classes as moderate and tropical so Hawaii is subject to many of the traditional weather patterns you’d expect in the tropics.

Saying this, island to island temperatures and climates can change so always do your research before visiting.

The core and ‘peak’ tourism season in Hawaii runs from mid-December to March or April. These are the most expensive months to visit and the busiest in terms of tourist numbers. Bare this in mind for booking.