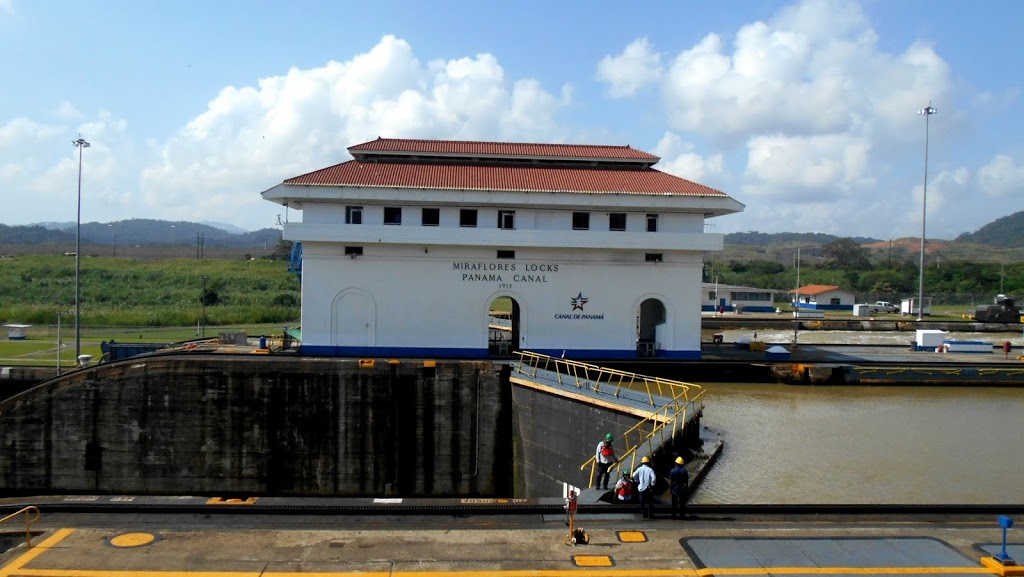 I was absolutely not leaving Panama without a quick stop at the Panama Canal. It’s a must see attraction and engineering masterpiece unlike any other in Central America.

If you’re planning on visiting Panama City dedicate a few hours to see the Miraflores Locks of the Panama Canal.

This is how to get to the Panama Canal from Panama City using the cities public transport networks.

We arrived in Panama’s capital, Panama City after exploring the island chain of Bocas del Toro.

Our main purpose for spending any time at all in Panama City was so we could catch a pre-booked flight to Cartegana, Colombia.

But, we weren’t leaving Panama so quickly! We had been hoping to visit the Panama Canal to watch a ship pass from the Pacific to the Atlantic or vice versa through the Miraflores Locks.

It’s a bucket list thing you know. So, when in Panama City we needed to first figure our how to get to the Panama Canal from Panama City.

But first here’s a bit of context.

The Panama Canal which is often called Canal de Panama in Spanish, is one of the worlds greatest engineering triumphs.

Completed during a time when Central America was overcome with Malaria, the Panama Canal cuts through the thinnest part of Central America separating North and South America and joining the Atlantic and Pacific oceans.

The Panama Canal has been in action since the early 1900’s with the first passage through the great waterway in around 1914, but this didn’t come without setbacks or tragedy.

The Canal was not just the vision of one person or one nation, multiple countries and engineers all played a role in the construction  and completion of the Canal.

With great engineering came great sacrifice as many of the men and women that worked on the construction of the Canal, especially in the earlier days of the project, lost their lives.

Many of which fell severely unwell due to the conditions and lack of health and safety regulations in the early 1900’s. Mosquitoes and disease carried by insets was also a massive issue.

Why is the Panama Canal Important?

The Panama Canal is important for many reasons and lots of backpackers travelling Central and South America choose to visit the Panama Canal due to its significance to this part of the world.

The Canal’s lock systems essentially splits the continents of North and South America through the middle allowing boats to transit from the Pacific to the Atlantic.

How to get to Panama Canal from Panama City

I’m a massive advocate for utilising public transport but upon arriving in Panama City the bus station seriously baffled me. It didn’t help that we arrived in the early hours of the morning on an overnight bus from Bocas del Toro.

We had read online about bus transport top up cards in Panama City so went on to purchase one and top up. This is a key point to remember if you plan on using public transport.

You’ll want to use a pre-paid top up card, purchase one from Panama City’s central bus station at Albrook Mall.

The bus station in Panama City is part of the Albrook mall, which makes it super busy and very frantic.

The hectic nature of this bus station and no sleep for us meant complete chaos when trying to get the correct bus to our Hostel – Villa Vento Surf. A

fter a couple of failed attempts we managed to get on the right bus travelling to the Marbella district of Panama City.

Fortunately for us we were a little bit more switched on when we visited the Panama Canal later that day and our bus troubles had seemed to wash away in the hostel pool at Villa Vento Surf.

How to get to the Panama Canal on public transport

To get to the Panama Canal on public transport you’ll need to head back to the central bus station at Albrook Mall.

Take the bus, metro or cab from your hostel back to the central bus station by Albrook Mall. We were able to jump back on the bus that originally took us to the Marbella area of the city.

Here’s a quick guide you should read before using public transport in Panama City. Once you are back at the central bus station you’re looking for any bus that is going to ‘Miraflores’.

Once you have taken a taxi or a bus to the Panama Cities central bus station at Albrook Mall, you will clearly be able to board any bus that says ‘Miraflores’ on it. Most busses actually depart from the island bus stops in the centre of the road.

Miraflores Locks is the name of three of the locks on the Panama Canal. The visitor centre at The Panama Canal is also aptly names The Miraflores Visitor Centre and all busses heading in the direction of Miraflors end up at the entrance of the canal.

You should have purchased a daily bus ticket as recommended, but if not, tickets can be purchased form the driver on the bus – although be warned.

They do not like doing this, especially on the tourist packed return leg of the journey.

If you time your visit to the canal well it is likely you’ll be able to watch one of the large ships pass through the lock system.

Your Panama Canal entrance fee gets you entry into the visitor centre and onto the viewing balconies at The Miraflores Locks. Each tourist visiting is also able to watch a small educational video on the history of the canal upon arrival.

These screen once or twice an hour in English. This is the cheapest way to visit the Panama Canal, unless you work on a boat that’s passing through.

You can book tours of the Panama Canal which will cost you upwards of $50. You don’t need to do this if you want to visit the Panama Canal and I would suggest just paying the entrance fee as we did.

By public transport and the DIY way is definitely the best way to visit the Panama Canal.

Where to Stay in Panama City

We stayed at the hostel Villa Vento Surf in the Marbella district of Panama City when we decided to visit the Panama Canal. We booked in online  through Hostelworld and got a great deal for a hostel of this size in a safe location.

The hostel itself was clean and friendly with a pool – a total bonus in the Central American heat. There are six main neighbourhoods/districts of Panama City – this quick guide by Jetset Times breaks each of the six districts down.

We chose to stay in Marbella as we knew there were good transport links to the airport and also some great chain restaurants and a lot of nightlife. We ended up actually eating at the TGI Friday’s in Marbella as a last Central American supper before we flew to Colombia.

How to get from Panama to Colombia via. The San Blas Islands

There aren’t many things I can say I regret in life, but perhaps not sailing to Colombia is one of them.

The popular boat journey from Panama to Colombia via the tropical San Blas Islands is one of the bucket list items on most Central American backpacking itinerary.

It’s reasonably priced and a very worthwhile experience. For more information on this journey then check out The Broke Backpacker.

2 thoughts on “How to visit the Panama Canal”