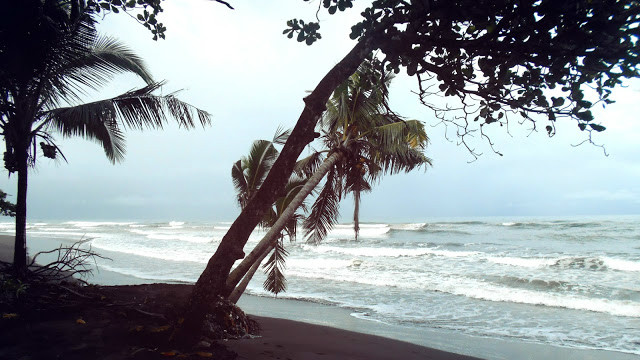 On my first visit to Costa Rica, Tortuguero National Park was the only place we chose to visit. We chose this destination for the wildlife and for the turtles!

We made the tough decision to only visit one destination in Costa Rica so we could save some money during our time in Central America. Compared to it’s neighbours Costa Rica is a little on the pricey side.

During a second trip to Playa Matapalo, Costa Rica I realised it wasn’t as expensive as my backpacking mind had convinced me.

Where is Tortuguero in Costa Rica?

We actually chose to visit Tortuguero over The Monteverde Cloud Forest in the north of Costa Rica because we were travelling south through Limon to Panama.

Tortuguero National Park is a protected area on the Caribbean Coast of Costa Rica. It’s around a three hour drive or bus from San Jose.

It is accessible by both the North and South if you plan to visit from Limon or Puerto Viejo de Talamanca, which is one of the more popular backpacker destinations in Costa Rica.

How to get to Tortuguero National Park

Although accessible from San Jose and Limon Province getting to Tortuguero National Park is a complex affair. You’ll want to listen very carefully to the below to work out how to get to Tortuguero.

The boat to Tortuguero

I’d go back to Tortuguero for the boat journey alone. It’s a total surreal experience being on a boat, deep in the overgrown river and deep in the beautiful Costa Rican rain forest.

During our boat ride we were always quietly aware of the lack of other human presence.

There’s no one around you for miles, you are completely alone with nature in the rain forest. Its very peaceful.

Sailing along slowly towards Tortuguero in complete silence is something you’ve seen on a documentary but never thought you’d find yourself doing.

The dense rainforest to your left and right along with the humidity and the silent hum of the boat engine carefully moving you along.

The landscape is everything you would hope to expect from a mixture of dense rainy rain forest and tropical Caribbean coastline. Without exaggerating we got to see plants and trees I’ve only ever seen on TV, we were engulfed by nature.

When you arrive at the foot of the National Park it’s all go. Find a hostel and plan your activities.

The tourism board is keen to get you booked on as many excursions as possible, most will cost you between $50-$100.

Its island-like being surrounded by water and sand, but the ever present tranquility of the rain forest is always around you.

It’s wet in Tortuguero (actually wet is probably an understatement), but what do you expect from the rain forest in Costa Rica.

There’s so much wildlife it’s difficult not to get over excited visiting a protected area like the Tortuguero National Park. Nature lives so comfortably with the small human population here.

Tortuguero, Costa Rica his home to a magnitude of different eco-systems and a whole host of wildlife including the turtles.

We chose Tortuguero over the popular Caribbean surf paradise of Puerto Viejo de Talamanca for the wildlife and nature.

I was teased with the idea of seeing turtles hatch too many times during my trip through Central America and that’s what led to my obsession with Tortuguero.

As a country Costa Rica is renowned for its luscious rain forests, national parks and diverse animal and plant life. We assumed Tortuguero would give us the chance to indulge in the real and pure version of  Costa Rica and it certainly didn’t disappoint.

Tortuguero is a natural breeding ground for turtles and the word ‘Tortuguero’ literally means Turtle Catcher in Spanish.

Like many people that reach the Tortuguero National Park we wanted to see some turtles in their natural habitat.

We booked our turtle tour in advanced for $20 a discounted price due to the low season status of our visit. We were aware that due to the time of our visit we’d be lucky to catch the end of the breeding season.

During our booking the guide gave us a welcome tour and told us when and where to meet and the items we would need to bring. A raincoat and a torch – this is the rain forest after all.

We met with our group that evening for the tour to start, just after dark. We headed out on to the beach which is a rough and vicious coastline with stormy shores and dangerous riptides.

It was a far cry from the Caribbean coast we’d experienced so far in Central America but still beautiful in a dangerous and raw way.

Quite quickly and unfortunately my Tortuguero dream came crashing down. The lack of turtles disappointed me and although due to seasonality there seemed to be another issue.

All the turtles we had found were dead!

We were bitterly disappointed  when all that we found were empty nests of recently hatched turtles eaten by local dogs. I’m not just talking about or two nests but hundreds of them, some scattered with empty turtle shells and even the most gruesome half-eaten baby turtles.

During our first turtle tour in Tortuguero there was a buzz in the air. It felt like every single person in our small group was there for a reason.

Our whole purpose to be on this very turtle tour and watch these incredible late hatchers find their way to the ocean to begin their lives.

Now, I’m not saying this happens all year round but this was a disappointing end to my Tortuguero love affair. It’s also how we coined the phrase ‘not so Tortuguero’.

The best time to visit Tortuguero

Based on our experience arriving in late November/early December is too late to catch the turtles. If you want to have a better experience than we did, you’ll want to arrive during the peak breeding season.

The majority of what you read online will tell you that you can see turtles all year round.

This was not true of our experience in Tortuguero, Costa Rica. For the best time to visit to see the Hawksbill turtles and Green Sea turtles you’ll want to visit from July – October. With August and September being the peak tourist months.

The Leatherback turtle nests throughout February and up until April, so a visit between February – October is recommended.

The cost of Costa Rica

I can only speak from my personal experience but Costa Rica isn’t your typical budget friendly Central American destination. For first timers visiting Costa Rica you’ll want to plan your budget well for a budget friendly backpacking trip.

Saying this, and since visiting Totuguero I have been back to Costa Rica as part of a shorter trip as opposed to a six month backpacking trip.

However, if you plan to visit Costa Rica as a single destination trip it is a budget friendly destination.

The below daily budget is based on the off season.

The fun element includes turtle tours and other excursions around the Tortuguero National Park along with drinking. If you chose to only do a turtle tour for $20 your daily budget would be $65.

The price of all your necessities are much higher in Costa Rica than Nicaragua.

Food, drinks including alcohol and even water prices area little higher but if you stick to a budget and eat and drink local you will see a difference.

Tortuguero is an intensely beautiful place. Costa Rica is an incredible country. The reality of what is happening in Tortuguero in the off season isn’t ideal and I hope that the locals will clean up the act of the dogs in future.

Obviously we were unlucky in our timing but I do fully recommend a trip to Tortuguero National Park in the peak season to have the full experience.

Tortuguero from everything I witnessed despite the obvious is an exceptional National Park filled with unique nature. The area is a total wonder from the unpaved streets to the small fence church to the parrots in each tree. The adventure to reach Tortuguero makes even the simplest of bus journeys an adventure.

I truly hope in the future this issue can be dealt with before it becomes out of hand and Tortuguero can always remain the Turtle Catcher.

9 thoughts on “Not so Tortuguero, Costa Rica”