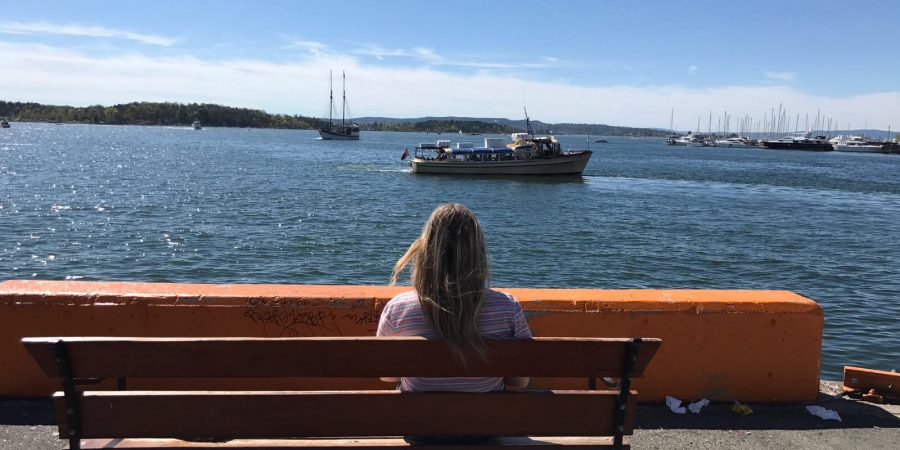 A girls long weekend in Oslo. With, of course a bargain Ryanair flight from Manchester and a pre-booked AirBnB that would cost us £80 each for 3 nights in Oslo, Norway.

A budget trip filled with Oslo sightseeing and fun, or so we thought. “Oslo is expensive” they told us, “It’s fine, I’ve been to Dublin” I said.

I knew Oslo was going to be expensive, I’ve heard the rumours about city breaks to all of the top Scandinavian hot spots and the cost of a simple drink or an overinflated McDonald’s.

With that in mind, here’s a non-budget friendly Oslo travel guide.

For your trip to Oslo, you’ll first need to get here. There are two main airports in Oslo.

Naturally, the cheaper budget airline flight fly into Oslo Torp. Which is the furthest airport away from the main city of Oslo.

Initially, we didn’t realise this despite reading about the different airports in some Oslo travel guides. We flew into Sandefjord Airport, Torp. Which is roughly almost 2 hour outside of the actually City.

Fortunately it is a well connected airport and trains and busses run in sequence to the departing and arriving flights. Although (and brace yourself) the train or bus option will cost you around 400/500NOK that’s about £40/£50.

Getting from Sandefjord Airport to Oslo centre is actually quite pleasant. Rail travel in Norway is much further along in its evolutionary process than that of British rail transport.

Overall, I was happy to pay the equivalent of £40-£50 as the journey was comfortable, clean and actually departed on time.

How to get from Sandefjord Airport to Oslo

You can either take the bus known as the Torpekspressen or take the train like we did to get from Sandefjord Airport to Oslo. Prior to arrival we had planned to take the bus.

However, we ended up buying a return train ticket from inside the airport which worked out as a quicker and more convenient journey.

A shuttle bus runs from Torp Sandefjord Airport which is perfectly timed with the incoming trains and only a five minute journey.

The 500NOK ticket can be purchased from any of the red and grey ticket machines located in the airport. They all say ‘Billett’ down the side and that’s about as Norwegian as it gets, everything else is in English purely for your convenience.

Where to stay in Oslo

With ours being a budget trip to Oslo, we decided to go for the cheapest accommodation option. This worked out as an AirBnB.

We booked our AirBnB online prior to travelling to Oslo and upon arrival located the apartment we’d be staying in a nice suburb just outside of the main city centre.

We decided to walk as it was early evening and it only took us around 15 minutes. We later found that the journey on a tram or bus would be around 50NOK which is around £4.

As mentioned this isn’t really a budget-friendly Olso travel guide as Olso budget travel doesn’t really exist, but if you are looking to save try AirBnB.

Things to do in Oslo

The city of Oslo is smaller than I expected. We seemed to get about everywhere on foot easily.

Perhaps it was my refusal to pay the £19.00 taxi starting fair that inspired me to explore the city so eagerly on foot. I suspect if you are exploring Oslo in the same fashion you’ll also want to walk.

There is a lot to see and do in the central city of Oslo, Norway so if you are keen to do some Oslo sightseeing you are in luck.

From the Opera House to the regenerated Oslo Waterfront and then to the sunbathed packed steps of Central Station, we found ourselves passing the same streets, shops and Cathedral daily as we became familiar with the city.

Despite visiting in late May, it seemed that summer was in full flow in Oslo with the sun shining brightly and warming the crisp Nordic air.

Oslo is pricey, I knew this before arriving and I was somewhat prepared for this, but something about the sweet summer sunshine seemed to soften persistent cost blows.

If you want to do some quick Oslo sightseeing then check out this list of things to see do and see when exploring Oslo;

One of the best things to do in Oslo is visit the Opera House, surprisingly not usually for the opera either.

The Opera House is in a part of the city of Oslo known as the Fjord City. As part of tourism regeneration efforts to boost tourism in Oslo this project was developed.

Oslo sightseeing isn’t complete without a trip to the Opera House. A marvel in itself for most, the Opera House on Oslo’s waterfront is a piece of invasive architecture created to mimic a glacier.

You can walk up the sides and on the top of the Opera House and it’s possibly the best place in the city for view.

We visited on our first day and decided to return to the tourist hot spot on our last evening to watch the sunset – a recommended thing to do in Oslo.

If you do want to watch the opera or even take a tour of the Opera House in Oslo you can buy tickets online or from the main ticket office.

I briefly mentioned above that the Opera House and many of Oslo’s top sights to see are located in a regenerated waterfront area known as the Fjord City.

In Oslo’s Fjord City you’ll find a wide selection of bars and popular chain restaurants. The Fjord City, much like Liverpool’s Albert Docks is an urban renewal project.

It was originally started in the 80’s and finished in the 2000’s with a second wave of regeneration to this area of the city centre. The Fjord City is very aesthetically pleasing and attracts the bulk of Oslo’s tourists, especially in the sun.

The area was once the port of Oslo, sitting right on the waterfront of the Oslo Fjord. Today, the area is packed with social life and fun and a must do for any Oslo sightseeing tourists.

Note that food and drinks in the Fjord City can be quite pricey, as is usually the case with core tourist areas. The universal drink of choice: a strawberry daiquiri, will cost you over 150NOK, but dare I say it’s worth it for the atmosphere and experience.

My only real bucket list item for my Oslo trip was to take a Fjord cruise. If exploring Oslo, it is more than likely you’ll want to learn about the Oslo Fjord.

What better way to learn about the Oslo Fjord than by taking a tour across it.

We found the tickets to be exceptionally reasonably priced all things considered at 290NOK. That’s the equivalent of £29 or in Oslo language two cocktails in an average bar!

The Norwegian Fjord Cruise from Oslo lasts around two hours but is packed with useful info and great sights to see.

We bought our tickets from a booth by the waterfront on our first morning, knowing we’d spend our second day in Norway on the Fjord.

The tour is informative, fun and enjoyable. Being in the water with the sun on our necks was definitely a plus. The tour lasts around 2 hours and snacks and drinks can be bought on the boat.

Get there early to get a good seat. On a warm day the boast fill up fast and all the best seats are naturally taken first.

The Oslo Fjord Cruise I would wholeheartedly recommend to anyone in the city. It’s an absolute must and should not be skipped on an Oslo sightseeing tour.

The cruises run all year round and are more frequent in the summer months during the peak of the tourists season.

If you’re looking to spend a some cash (your life savings) a night out in Oslo is certainly the place to do so. There’s a wide range of trendy and traditional bars at your fingertips where the beer costs a tenner and there’s ‘snus’ in the ashtrays.

We found Torggata by accident but the trendy indoor/outdoor street is filled with bars, restaurants and all the tunes you could possibly need.

I’ve since read in some Oslo travel guides that Torggata is one of the most recommended places to go in Oslo.

We drank in Wurst and Angst and were actually recommended Angst by our Norwegian host. Angst was packed, Oslo on a Friday night is a vibrant and lively place to be.

We sat outside and watched the busy courtyard style street fill up throughout the night. We drank 140NOK Aperol Spritz and watched serial snus-ers pop tobacco pillows under their gums in amusement.

You can find Angst and Torggata – the courtyard style street at the top of the main street that runs past the Cathedral and Burger King.

It is slightly hidden but look for the MacDonald’s and walk up the Alley Way to enter the ‘courtyard’ that isn’t actually a courtyard it just looks like one.

If you’re looking for a top cheap eatery and love pizza I recommend Mamma Pizza.

It’s a reasonably priced traditional Italian pizza restaurant in the heart of the city. The service is no frills but the pizza is amazing and you’ll only spend around 150NOK on a large pizza and drink.

Getting to know Oslo

On a final note, I was disappointed in the real lack of Scandinavian culture in Oslo, I found that that sense of Scandinavia was missing and I’m not sure what I was expecting otherwise.

Perhaps exploring Oslo in the sun isn’t the ideal scenario and for a more authentic Norwegian experience try a trip in the midst of winter for the northern lights.

Without sounding too negative I felt that Oslo as a city felt much younger than its Central European equivalents and I’m guessing that is due to all the regeneration projects and urban renewal that’s been undertaken.

I know the urban renewal efforts will only make this city more tourist friendly and add to the great nightlife and bar seen that we got to experience.

Oslo was fun, I was in a city in the sun and it was the weekend. But I couldn’t help feeling like I could’ve been in any city in any country in the world.

The city wasn’t particularly breathtaking at all, it wasn’t as clean as I expected the architecture a lot of the time was hidden behind new larger buildings or large structures.

Of the European cities I have seen there was nothing too exciting about Oslo. Except of course for The Fjord, which is by far the key motivation to visiting Oslo and you’ll probably read this in many Oslo travel guides.

I can only assume. That’s what sold a trip to Oslo to me, the idea of a cruise along a Norwegian Fjord – I would’ve booked any trip for that alone.

6 thoughts on “An Oslo Travel Guide and Oslo Sightseeing”