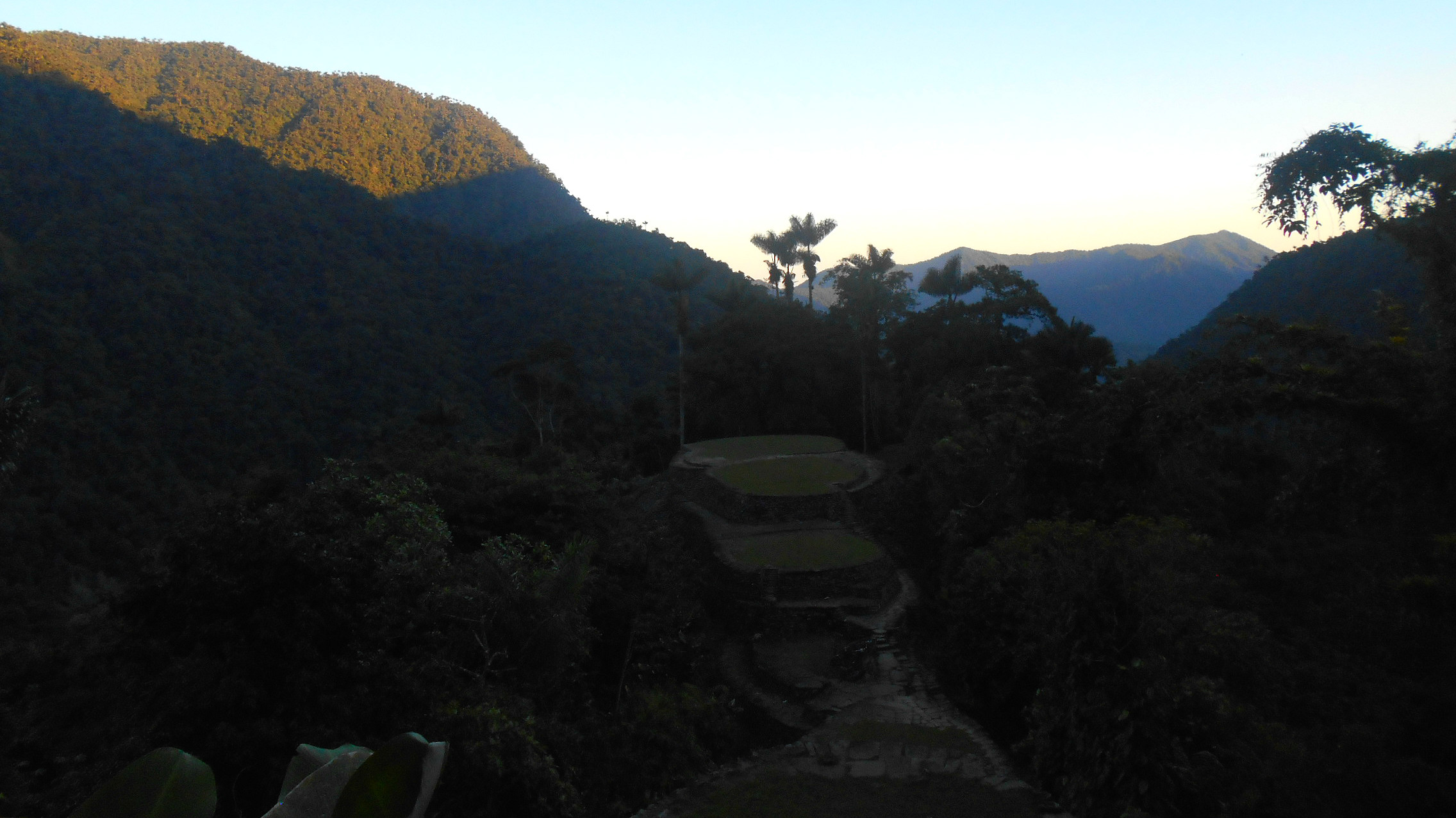 It takes a grueling four days and a lot of blood sweat and tears to get to The Lost City.

It would be an understatement to say that I was not impressed at the prospect of a 4 day hike. The hike would take me through the Colombian jungle as part of the popular Lost City trek.

Equally, I’d be underestimating my feelings if I said I was only a little dramatic about the whole ordeal. And yes, I’d be lying if I said I wasn’t slightly embarrassed of my stick-throwing-rock-kicking tantrums.

The Lost City in Colombia

Trekking through the Colombian jungle

Regardless of my initial reactions, to The Lost City trek there’s a but! Because I really couldn’t be happier to have had this extraordinary experience.

If you’re heading to Santa Marta from Cartagena or Taganga I would recommend booking The Lost City or Ciudad Perdida trek.

Although extremely challenging, my Lost City trek experience was worth every bead of sweat (and there were many).

What is The Lost City trek?

So what really is the Lost City trek and what does it involve?

The Lost City trek is a 4-7 day hike through the stunning Sierra Nevada de Santa Marta in the Magdalena province of Northern Colombia.

The Lost City in Colombia also known as Ciudad Perdida is a set of ruins hidden deep in the jungle in Colombia.

The goal of the trek is to reach the Lost City at the end and top of a tough hike. The length of time and difficulty to of the trek vary, and you can take part in a 4, 5 or 6 day trek.

Four days is the most difficult trek as it takes the least time to reach the Lost City.

The four day trek to the Lost City

We somehow managed to sign ourselves up for the 4 day trek. Which is the shortest time scale and the most physically demanding. What were we thinking? I don’t know. If you are up for a challenge then this one is for you.

All of the guides that lead the expeditions are genuine members of the indigenous community of Colombia. Most know the area of the Sierra Nevada like the back of their hands.

Most of the guides you meet have lived and worked within the national park all of their lives. Even the ones who no longer live here still have connections through relatives and often through sentiment for the area.

This may not sound like a big deal right now, but it’s pretty impressive when you realise how remote some of these communities are.

The people of the Sierra Nevada National Park

The communities that live within Sierra Nevada de Santa Marta have lived a troubled existence. Especially during the times of paramilitaries that once occupied most of the park for a very long period of time.

Nowadays, through tourism efforts, these peoples are able to promote a sustainable way of living and education across the indigenous population.

After years of friction between the indigenous communities of Sierra Nevada and the Colombian Paramilitaries and drug cartels the people now have full rights to the land in the national park.

The people here have full access to something they have believed is rightfully theirs for thousands of years.

Now perhaps these people have an alternative and hopefully brighter future to what was before. Thanks to tourism, as the lives of these people are no longer bound to the Coca plant.

The overall aim of the hike is to reach an ancient archaeological site named The Lost City or Ciudad Perdida.

As mentioned the ruins are at the end of the hike and it genuinely couldn’t be any more of a “Lost City” you’ll know why once you experience Ciudad Perdida trek.

The archaeological site is buried deep in the jungle, hidden behind hundreds of years of history.

You can only reach the summit of Ciudad Perdida on foot which makes reaching the top all that more breathtaking.

The summit is impressive because of how secluded it is, the wildlife, the sounds of nature, the midnight fireflies you catch in the distance it all adds to the atmosphere of this wilderness setting.

It’s ceremonious looking at the ancient city structure feeling above the clouds. Personally, for me, the most spectacular thing was finding out it was only rediscovered in the early 70’s.

The Lost City has been left hidden for centuries since 800 CE. That makes the Lost City even older than Machu Picchu.

The city itself was built and used by an ancient civilisation who lived deep in the Sierra Nevada de Santa Marta. It was only found by explorers in 1972.

The explorers had to climb 1,200 steps as trekkers do to reach the terraces at the top.

There’s still a lot to be learnt about the people who lived at the Lost City and why they lived so far from other communities.

The general consensus is that they were able to live here because of the river that runs through the park. This was all of course prior to the Spanish conquests.

There are multiple companies that operate out of Santa Marta and offer tours.

We chose to go with Magic Tour who are also based in Santa Marta. You can book your trek and spend the night in one of the popular hostels before leaving early to start the trek.

The four day trek costs $250 USD but all food and most provisions are included including camping at the several camps and mosquito nets which are a must.

Hostels in Santa Marta are usually between $8 – $12 US Dollars per night.

As referenced the food on the tour is included in the price.

The food is some of the best we’ve had on this trip, even the vegetarian option which I fully did not expect.

It’s pretty remarkable considering the facilities that are available but they somehow make it work. 3 meals a day plus juices, fruit, cakes and snacks.

When it comes to sleeping the sites dotted along the route are organised and coordinated. Most have toilets and shower facilities along with cooking facilities.

The sleeping arrangements are make shift bunks but there is always room providing you are on a tour.

Thinking about the Lost City trek?

To summarise the trek to the Lost City there’s plenty of photo opportunities and picturesque swimming holes to cool down in.

On the way up there’s a few questionable looking rickety bridges to cross for adventure lovers.

You come face to face with mule after mule and also a wide range of wildlife. We managed to see snakes and even a huntsman spider.

The scenery and experience speak for itself. But, the trek to the top require focus and determination because it is tough.

You are expected to climb 1,200 steps as the explorers did to reach the summit of the Lost City.

The 1,200 steps fall on the last day of the trek, which is the hardest day naturally. By this point you are ready to give up!

I think what I’m trying to say here is if you plan on doing the Ciudad Perdida trek don’t take this tour lightly. There’s definitely no room for underestimation as I learnt.

It’s difficult, that goes without saying. But it’s worth every aching step and I think you’d struggle to find someone who who tell you any different. For me, I was able to achieve something I genuinely didn’t think I’d be capable of doing.

If that’s good enough for you along with everything else you discover and learn on this trek then bloody go for it, The Lost City awaits you.