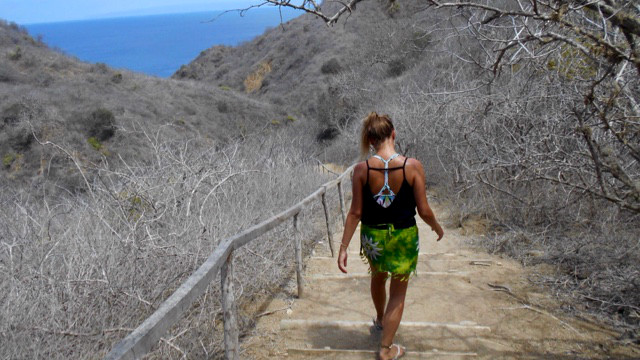 I first heard the words ‘Poor Mans Galapagos’ in a hostel in Quito, Ecuador. From hearing the words, I started researching Isla de la Plata and instantly became obsessed.

As always, when I get an idea in my head I became hooked on the idea of visiting the Ecuadorian island and ‘poor mans’ version of the famed Galapogos.

After some questionable boat experiences during my time in South America, I convinced myself that the hour long journey would be non-life threatening.

From a fantasy in a Quito dorm room to an 11 hour bus journey I found myself aboard a boat speeding towards the island known as the Poor Mans Galapagos in Ecuador.

Quito and the great Volcan Pichincha would be our first stop in Ecuador. We’d travel from Quito to some of the top attractions in the area including Otavalo Markets – a must see for backpackers.

During our time in the capital of Quito we’d tackle the Pichincha Volcano hike before heading on to Banos for water sports and death by whitewater rafting.

Finally we’d make our way to the sleepy fishing town of Puerto Lopez to experience The Poor Mans Galapagos. But first, let me explain the $1 bus rule in Ecuador – you’ll love it!

If you are going to be spending any significant amount of time in Ecuador you’ll want to know about budget bus travel.

We read in a lot of places that roughly busses in Ecuador work out as $1 for every hour you travel. Upon arriving in Ecuador this seemed to be true.

We tested this theory during our trip to Otavalo Market and rightly so the bus fare worked out at $1 per hour.

This is a great tip to remember for budget travel in Ecuador. We found ourselves testing this theory again on our way to Puerto Lopez.

The prospects of an 11 hour bus journey west to the Ecuadorian coast of Puerto Lopez didn’t phase me at all. I say this, but we all know how tough sleeping upright can be.

I knew I’d spend most of the journey fantasising idly about sun sea and the sand on my feet. As someone who is besotted with the ocean and beach I was more than ready for the coast.

During our time in Ecuador and Southern Colombia we’d mostly been in land. This meant that at this point in my South America route, I hadn’t seen the ocean since Cartagena and Taganga at New Year.

We selected Puerto Lopez from a map in a Lonely Planet. It’s one of the many coastal towns in Ecuador you can visit Isla de la Plata from, which was ultimately our destination of choice.

The bus worked out at around $14 for 11 hours, slightly debunking my $1 bus rule. And after just under 11 hours we made it to Puerto Lopez.

Where is Puerto Lopez?

Classed as a small fishing village, not dissimilar to Huanchaco in Peru, Puerto Lopez is located on the pacific coast in an area known as the
Machalilla National Park.

The area is popular with tourists because of the national park and the ability to partake in whale watching. All this, and of course the Poor Mans Galapogas.

We arrived in Puerto Lopez at sunrise and figured if we could dump our bags fast enough for an early dawn swim.

Puerto Lopez is visited by tourists mainly for the wildlife and especially whale watching trips and tours during the whaling season.

Most people who visit Puerto Lopez, Ecuador combine these tours with a trip to Isla de la Plata.

When I first read about Isla de la Plata many people told me they only ever heard of Puerto Lopez for the tours. Upon arriving I realised why.

Puerto Lopez is very small with not too much to offer in the way of tourism. Although inhabiting over 16,000 the town is very small.

A handful of shops, bars and restaurant mainly filled with locals line the simple streets. Although there are enough amenities here, the coastal town is very basic.

As we had arrived in the off season (outside the core whale watching months) everything was very quiet.

The whale watching season begins in June and runs through to October. We arrived in Ecuador in February right outside of the peak months.

We weren’t actually sure we’d even be able to book an Isla de la Plata tour. I was worried my Poor Mans Galapagos dreams would come crashing down.

Fortunately, this was not the case!

My worries were for nothing. Within the first few hours of arriving we had booked our Isla de la Plata tour.

Some of the tours to Isla de le Plata are less frequent outside of the core months. You may want to do your research if you have a specific one in mind.

Cost of a tour

Our  Isla de la Plata tour included snorkelling, lunch, snacks and drinks and was planned for the entire day. The trip in total cost $30 for the full day along with a $1 national park entrance fee.

It takes one hour to get to the island and an hour to return. During this time we received fruits, cakes, drinks and sandwiches provided all inclusive of our $30.

The origin of island title Poor Mans Galapagos comes from the islands similarity to the Galapagos but it’s significantly cheaper cost to visit.

As $30 you can see why it’s much more budget friendly than a Galapagos Island tour.

Isla de la Plata is home to diverse bird and marine life and completely uninhabited like the smaller islands of Galapagos.

The island itself is beautiful, dry and barren with a mixture of plant and bird life. The desert-like land in contrast with the crystal ocean makes for a pretty special photo.

On Isla de la Plata Blue Footed Boobies nest everywhere. They are completely un-disrupted by the visitors. This is due to thousands of years of no contact.

The guides are very passionate, they care about the conservation and well being of the island which is always refreshing to see. At least that’s what I got from them. The tour was in Spanish so I had to do my best to keep up.

You can only imagine the absolute scenes when a woman sparked up a cigarette below a ‘No Fumar’ sign on the no smoking island. She was promptly rugby tackled to the ground.

The beaches of the Poor Mans Galapagos are quiet, there is no evidence of human visitors at all and the wildlife rules.

In the shallows off the island you can find groups of sea turtles fighting with Pelicans. Likely for spoils from the visiting boats and anything else they can get their hands on.

The island tour guides split our group up for two separate bird tours. We’d see native Frigates and Boobies clinging to whatever piece of shade they can find.

An interesting fact about Isla de la Plata is there are no Mosquitos here. They never arrived for some reason, therefore there is no Mosquito carried disease on the island.

The reason for this is that some of the plant life actually have natural mosquito repellents that cannot be found as commonly on the mainland. Minty smelling little things that remind you almost of the citronella products so widely available.

After our educational (another guess as the tour was mostly in Spanish) bird tour around Isla de la Plata and questions about the island’s ecosystems, climate, discovery etc it was time to rejoin the rest of our group for some organised snorkeling.

By this point pelicans and turtles has come to join the boat crew on the water who may or may not have fed them.

From the boats we’d managed to grab some shots of the turtles. Y’all know how much I love turtles!

The snorkeling on tour takes place in the clearest of clear, warm waters hosting a range of exotic fish including trumpet fish and star fish.

We were taken back to the boats as opposed to staying on the preserved beach. Once back on the boat you are free to snorkel around the reefs and rocks freely. This is providing you’re respectful of the plant and animal life in the water,

The area is still part of the national park and the tour guides are very strict and particular about the behaviour of tourists.

An hour passes pretty quickly when you’re exploring aquatic worlds, I know a lot of people felt the same as we did when it was time to pack up and leave.

Unfortunately my funds don’t quite stretch to the Galapagos and I’m not sure they will for a while yet.

But saying that, if you are like me and still want to have quality experiences whilst travelling on a budget then an Isla de la Plata tour is for you.

If you plan on spending any time in Ecuador you won’t want to skip this tour or Puerto Lopez.

The town of Puerto Lopez hasn’t much to offer in the off season though so I’d suggest arriving in peak and combining your trip with a whale watching tour.

As previously mentioned it is quite common for people to do both from Puerto Lopez from June – October. You’ll probably end up with a more positive opinion of the town than I do too.

However, I wouldn’t let this put you off visiting in the off season if you absolutely have to. The island is stunning and the guides are exceptionally professional.

If you can’t afford the Galapagos this time round then take a trip to the budget friendly version like I did.