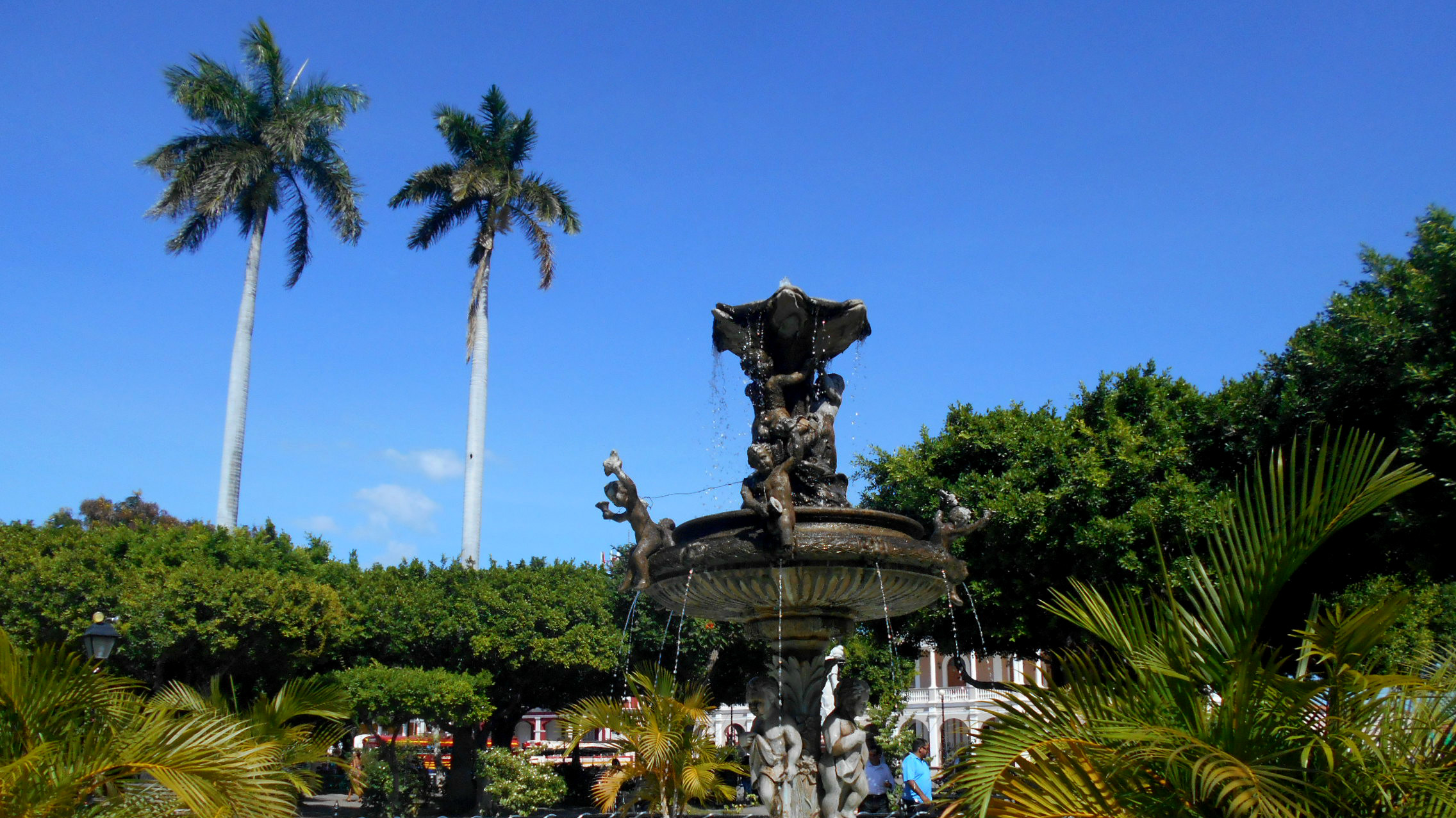 At no point in our Central America travel planning did we mention visiting Granada, Nicaragua, but I’m so glad we did. This is exactly why you should visit Granada in Nicaragua.

During my time in Central America, I’d been told that tLeon was the place to be in Nicaragua.

However, as travel goes, our plans to visit Leon soon fell short and we found ourselves aboard a bus to the Granada, Nicaragua. A city that would soon become one of my favourite Central American cities.

This is why you should visit the energetic Nicaraguan city of Granada and the top 10 things to do in Granada, Nicaragua.

How to get from Leon to Granada, Nicaragua

First of all, you’ll want to know how to get from Leon to Granada. From the city of Leon you can head straight to Managua – the Nicaraguan capital via collectivo.

As with most Central American capitals , you probably won’t want to spend too much time in Managua. It’s more of a transit hub than a cultural wonder.

When I arrived in Managua it was simply to change busses between Leon and Granada. The journey from Leon to Managua takes approximately an hour and the journey from Managua to Granada takes another hour.

All in all, it is quite simple to travel between these three Nicaraguan cities in under half a day.

If you have a strict Central American itinerary, this is good to know for time saving purposes.

If you don’t want to go directly from Leon to Granada, you can take a detour to Las Penitas.

The small coastal villageof Las Penitas is popular with backpackers visiting Leon. Many people leave the heat and hustle of Leon and spend a few days in Las Penitas. We personally disliked how dirty and rogue Leon felt and after a couple of bad taxi experiences we decided to move on.

Leon is an extremely busy city, we arrived in the early hours of the morning with another group of backpackers and could not find a single hostel with more than two available beds.

Let down by a sleepless morning in Leon and desperate to leave, we jumped on the first bus to the coastal town of Las Penitas.

We’d heard rumours about a turtle sanctuary and hatchery close to Las Penitas that was relatively unknown along the Central American backpacking route.

Check out the Surfing Turtle Lodge, but you’ll want to book well in advance to avoid disappointment. When we arrived it was also fun.

The bus station in Leon is busy and stressful. If you plan on taking a bus or collectivo from this station you’ll want to plan ahead to ensure it’s a stress free experience.

Collectivos in Latin America are usually organised minibus services or shared taxis. They are an extremely cheap, efficient and convenient way to travel around much of Mexico and Central America.

From our turbulent time in Leon and Las Penitas we were hoping we’d have more of a success with Granada.

Granada is one of Nicaragua’s largest and most populous cities. It is located on the shores of the huge Lake Nicaragua which is the twentieth largest lake in the world.

In 1524 during the Spanish colonisation of Latin America Granada was renamed and the rebuilding of the city we know today began.

With its transport links from Managua and other areas of the region Granada is extremely popular with backpacker and tourists travelling in Central America.

Why you should visit Granada, Nicaragua?

From The Plaza de Independencia to the restaurant packed pedestrian streets Granada is beautiful.

Everything about Granada made me feel like I was right back in Europe. There are top eateries and great bars in abundance and the Colonial Centre is filled with colourful architecture you can’t help but be in awe of.

Art work, music, cuisine, architecture, people, adventure. The lively streets are warm and adopt you as their own. The people are fiery, full of life and wonder. Each with their own story to tell or restaurant to reccommend.

Top 10 things to do in Granada, Nicaragua

There is an incredible cafe culture in Granada, which is most likely why this city reminded me so much of Europe. The restaurants are clean, and although not as budget friendly as other cities in Central America there are still great deals to be found.

Avenia La Calzada is the main location you’ll want to add to your Granada, Nicaragua travel bucket list as this is where most of the top restaurants can be found.

9. Visit one of the many Irish pubs

Randomly, there are many Irish pubs in Granada along with a few English pubs and bars too. Enjoy the bar scene in Granada and experience it’s love of Ireland through Granada’s best bars.

Check out all the backpacker and tourist favourite and enjoy the fun cafe culture in Granada along with its great nightlife.

Most are reasonably priced and include a trip to several different islands including stopping by Monkey Island. A mysterious Island on one of the worlds largest lakes that is inhabited by monkeys!

7. Stop off at one of the islands on Lake Nicaragua

Ensure that you book a boat tour that allows you to stop off and explore some of the small islands on Lake Nicaragua.

Our boat tour of the Lake from Granada left in the afternoon, which meant we were on the water during sunset. We were even able to stop off at another location by the lake for an icy cold Cerveza by the shore.

Before you plan to do anything in Granada you’ll find yourself on the great colonial Plaza de la Independencia, right by Central Park in Granada. Most busses coming from Managua and Leon stop right by Park Central.

The majority of places to stay in Granada are also located in this area. This stunning and ever popular area has some incredible architecture and great photo opportunities.

5. Explore the colonial streets and history

The architecture in the city of Granada is 100% colonial Spanish and has great significance for Nicaragua.

The colonial heritage is something many people travel to Granada to see, and you can simply spend an entire day exploring. The city is named after it’s Spanish counterpart – Granada, Spain and has many references to The Alhambra.

During the colonial period, Granada was the sister capital of the Americas next to Antigua in Guatemala. If you have been to Antigua you’ll see why. The two cities are very similar in appearance.

For tourists, there are horse and carriages tours around the city, but I much prefer to walk. The sun can be very hot in Granada so always be cautious of this if you plan on spending hours wandering around.

As with all the countries of Central America, it is very common for backpackers to spend a few weeks in a certain city to learn some Spanish.

Granada is one of those cities and I even toyed with the idea myself. Due to the natural Spanish accent in Latin America, backpackers choose to take part in home stays. There are a lot Spanish language courses to choose from.

There is so much fun for backpackers in Granada, every tour guide, every hostel and every bar can give you information on the weekly events.

In terms of nightlife in Granada find out about the island parties around Lake Nicaragua and Laguna de Apoyo.

Watch out for tree house events and parties this one is a popular favourite for travellers.

The treehouse is a popular hostel for backpackers situated on the side of Mombacho Volcano just outside of Granada. You’ll find this backpacker hot spot fills up quickly so book in advance.

Regular free shuttles leave for The Treehouse all week from it’s sister hostel The Townhouse in Granada. As mentioned the beds fill up just before the weekend with backpackers looking to enjoy some of the events at The Treehouse.

2. The waters of Laguna de Apoyo

Organised trips, public busses and taxi rides can take you here from one of the central streets of Granada or the Plaza de la Independencia.

People actually choose to stay the night in one of the lake view hostels and I’m regretful that we didn’t! You won’t want to miss chilling in a hammock and enjoying the clear waters of Laguna de Apoyo.

If you plan on taking the popular day trip from Granada, grab a tube, swim out to the wooden pontoon or even stay for dinner.

The location of the lake is perfectly situated high up so it’s great to escape the intense heat of Granada. Due to it’s structure, the water at Lagunda de Apoyo is some of the cleanest swimming water in the whole country.

Most of the hostels do charge a small fee to enter Apoyo. You can only really access the laguna shores through one of the hostels.

Believe it or not there’s even diving going on in the clear waters. If that doesn’t sound like the perfect day trip from Granada I don’t know what is.

Nicaragua has endless options when it comes to excursions and Granada is no different. Always check with a tourist information centre for more details on the best excursions and things to do in Granada, Nicaragua.

1. Photograph the Cathedral of Granada

The stunning and photogenic Cathedral of Granada is an incredible yellow colonial structure. It is formally known as Our Lady of the Assumption Cathedral but many people just refer to it as Granada Cathedral.

Any visit to Granada would not be complete without checking out Granada Cathedral. This is undoubtedly one of the top 10 things to do in Granada.

There are always safety considerations to think about when travelling. This is no different in Central America.

Granada turned out to be the only real place we considered sticking around. I could finally understand why all those travellers had chosen to stay in places like Antigua and Leon. Especially if this is how it made them feel.

Although we savored our time in Granada, Nicaragua it doesn’t go unnoticed that there is a large tourist presence. The energy in Granada never fails. The well maintained streets make you feel secure but Nicaragua is still a very deprived country.

Many Nicaraguans live in poverty and unfortunately the large presence of tourists in Granada, often flashing and splashing cash, attracts a negative minority.

Crime and begging is rife in Granada and it is important that you watch your pockets.

Keep a close eye on your belongings while you’re exploring and keep your whits about you. Street children work in groups to hustle unsuspecting tourists. Be vigilant.

Don’t let this put you off!

Despite the petty theft and begging in Granada it is a truly stunning city with so much so do and see.

If you like energy, cafe culture, conversations with strangers, colonial architecture and feeling like you fit into another corner of the world perfectly, then Granada is the place for you.

Don’t skip Granada like we almost did add a visit to your Nicaragua and Central America bucket list.

5 thoughts on “Why you should visit Granada, Nicaragua”